ANN ARBOR, Mich. – More adults than ever are visiting their doctors’ offices for a prescription to treat atrial fibrillation, according to a study led by the University of Michigan Frankel Cardiovascular Center. 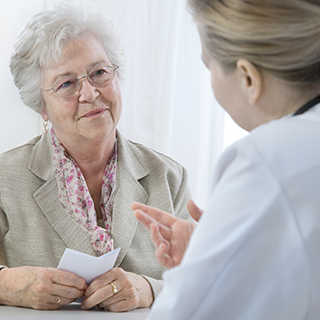 Popular new blood thinners may be behind a surge in doctor visits to treat an irregular heartbeat, commonly called Afib.

Across the United States doctors charted more than 2.83 million treatment visits in the last quarter of 2014, up from 2.05 million at the start of 2009, for use of anticoagulants.

The upward trend in visits is largely driven by the popularity of new direct oral anticoagulants (DOAC), blood thinners that have been heavily advertised as simple to use. Their use tripled from 2013-2014.

Doctors turn to anticoagulants to keep a healthy blood flow among patients with the abnormal heart rhythm atrial fibrillation or blood clots in the legs and lungs called venous thromboembolism.

The findings were published online ahead of print in The American Journal of Medicine and suggest more people may be getting the treatment they need for atrial fibrillation.

“The data provides a promising outlook about atrial fibrillation which is known for being undertreated,” says lead study author Geoffrey Barnes, M.D., MSc.,  cardiologist at the University of Michigan Health System and researcher at the Institute for Healthcare Policy and Innovation.  “When we don’t treat atrial fibrillation, patients are at risk for stroke. By seeking treatment, patients set themselves up for better outcomes.”

Warfarin therapy dominated stroke prevention in atrial fibrillation until the first in the new class of anticoagulants was approved in 2010.

The newly designed medicines have fewer food and drug interactions and do not require frequent blood checks the way warfarin does.

Despite their costs, the arrival of the DOACs made the prospect of stroke prevention less burdensome. 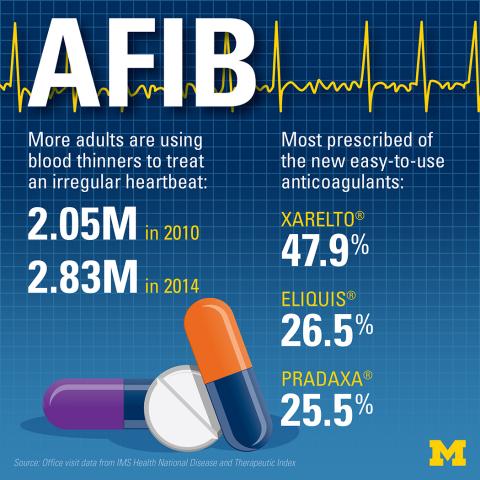 For the study, researchers analyzed the IMS Health National Disease and Therapeutic Index which surveys approximately 4,800 physicians identified through a random audit of the American Medical Association and the American Osteopathic Association. The survey captures information on all clinic visits representing about 350,000 office visits each quarter.

The findings show warfarin therapy visits declined between 2009 and 2014, while direct oral anticoagulant treatment visits have risen over one million per quarter since their introduction in 2010.

DOACs have been quickly adopted and risen to nearly match the use of warfarin. Last year, 57 percent of anticoagulant visits were related to warfarin use compared to 43 percent related to DOACs, according to the study.

Dabigatran (Pradaxa®) accounted for the majority of prescriptions for DOACs from 2010-2012, but options grew and by 2014 rivaroxaban (Xarelto® ) became the commonly prescribed oral anticoagulant during atrial fibrillation office visits, the study showed.

Disclosure: Dr. Barnes received research funding from Bristol Myers Squibb/Pfizer and Blue Cross Blue Shield of Michigan as well as consulting fees from Portola Pharmaceutical, none of which supported this analysis. Dr. Alexander is chair of the FDA’s Peripheral and Central Nervous System Advisory Committee, serves as a paid consultant to IMS Health and serves on the IMS Health scientific advisory board.