he messenger substance, which is released in response to oxygen deficiency or damage incurred, may possibly be used to specifically activate brain stem cells in the wake of injuries or during degenerative diseases. 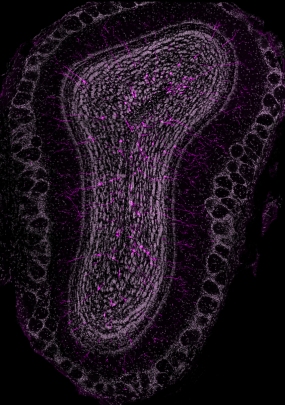 Olfactory bulb interneurons generated out of neural stem cells transplanted in the walls of the lateral ventricles. | © Ana Martin-Villalba, DKFZ

For decades, researchers were convinced that they do not exist: neural stem cells that take care of regeneration in the brain. By now, these cells have been detected in all mammals. They occur primarily in two defined areas of the brain: the hippocampus, where they play a key role in memory building, and in the subventricular zone, which is the largest reservoir of neural stem cells in adult animals.

The stem cells in the subventricular zone are considered to be the source of brain regeneration. They are not a uniform cell population. Scientists have found evidence suggesting that they are pre-determined to take varying developmental paths and can differentiate into various types of neurons.

“We are particularly interested in finding out how we can stimulate stem cells to regenerate damaged tissue after brain injury,” said Ana Martin-Villalba from the DKFZ. “We wanted to find out whether there are molecular characteristics to identify stem cells with regenerative potential.”

Enric Llorens-Bobadilla and Sheng Zhao from Martin-Villalba’s research division have now generated a molecular profile of neural stem cells from the brains of mice. For this purpose, they sequenced the complete RNA of individual stem cells, i.e., the transcripts of all genes that are active in these cells.

The scientists discovered that the neural stem cells occurred in different activation stages. Besides dormant and active dividing stem cells, they also found transition forms that had already been awakened from dormancy but had not yet started dividing actively.

The characteristic feature of dormant neural stem cells is their extremely reduced protein synthesis. The more active the cells are, the more they synthesize proteins and the more they reduce their glucose metabolism. At the same time, these cells increase the production of transcription factors that are essential for differentiation into specific cell types.

In order to find out how neural stem cells respond to brain injury, the researchers experimentally provoked a state of reduced blood supply in the brain s of mice before isolating the stem cells. The subsequent single-cell analysis showed that not all neural stem cells respond to the oxygen deficiency. Only a specific subpopulation of dormant stem cells assumed an “awakened resting state”. This was associated with the activation of protein synthesis and cell cycle control genes.

The researchers then searched for the mediator that transmits the activation signal in response to the oxygen deficiency to the stem cells. It turned out to be interferon-gamma that signalizes the emergency. This signaling molecule acts like an alarm clock that puts specific neural stem cells from their deep dormancy into a pre-active state.

Interestingly, a couple of years ago, Marieke Essers, who pursues research at the HI-STEM stem cell institute (financed by DKFZ and the Dietam Hopp-Foundation), was able to show that dormant blood stem cells are also awakened by interferon-alpha, a related immune mediator.

“After injuries or during degenerative diseases such as Alzheimer’s or Parkinson’s, it is essential to replace damaged brain tissue by new, functioning neurons,” says Martin-Villalba. New neurons also continuously form in the healthy brain. However, this is a very restricted spectrum of neurons, which are mainly responsible for smell or creating new connections in the hippocampus. By contrast, interferon-gamma induces a specific group of stem cells to differentiate into a large variety of neurons that can assume various tasks. “We might use the interferon-gamma alarm clock to stimulate specific regeneration processes in the brain that may restore the capabilities of affected persons,” neuroscientist Martin-Villalba speculates. “Our working group now investigates how this can be done.”

A picture is available at the Internet: http://www.dkfz.de/de/presse/pressemitteilungen/2015/bilder/MAX_aNSC.jpg