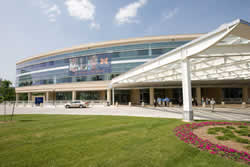 ANN ARBOR, Mich. – Seemingly every year there are reports of a young, apparently healthy athlete dying on the court or playing field.

The sudden death of Wes Leonard, a junior at Fennville High School, who died of cardiac arrest from an enlarged heart on March 3, may have parents and coaches wondering if enough is being done to identify athletes at risk for dying suddenly.

“We would like to develop a better screening program to help prevent sudden cardiac death, but there is not enough rigorous data to support what that should look like,” says Sanjaya Gupta, M.D., clinical lecturer in the Division of Electrophysiology at the University of Michigan Health System.

Some communities have begun programs to perform more extensive heart testing, including electrocardiograms and sometimes echocardiograms on students before they compete.
Yet a task force organized by the American Heart Association to evaluate pre-participation screening practices has not supported such community programs due to a lack of evidence that they are able to reduce the number of sudden deaths.

A large trial recently completed in Israel concluded that mandatory ECG testing of athletes prior to sports participation did not reduce the number of deaths from sudden cardiac arrests.

“One of the major obstacles to developing a better screening process is that no one heart test is the best,” says Mark Russell, M.D., a pediatric cardiologist at the University of Michigan’s C.S. Mott Children’s Hospital. “There are a number of different heart conditions that can cause sudden death in a young athlete.

“For some heart conditions, the ECG is the best test. For other heart problems, an echocardiogram is required,” Russell says. “Unfortunately, both tests are usually normal in some individuals whose heart problem can only be diagnosed with an exercise stress test.”

Furthermore, some conditions such as hypertrophic cardiomyopathy, a thickening of the heart, or dilated cardiomyopathy, the cause of death of the Fennville, Mich. Teen, can develop over time. A single screening may not detect the condition.

As many as 10 million to 12 million young athletes in the United States participate in competitive athletics, identifying which of those athletes is at significant risk of sudden death is a bit like finding a needle in a haystack, doctors say.

How can you responsibly identify the student who is at risk without excluding thousands of other students from participating in sports?

The most important step may be to ensure that the screening process outlined by the AHA is being performed as recommended. The AHA recommendations require that the screening form document 12 specific aspects of the student’s personal medical history, his/hers family medical history and a physical exam. If any concerns are identified based on the initial screen, then referral to a cardiologist is recommended.

Unfortunately, until very recently, the pre-participation screening form approved by the state of Michigan only covered five of the 12 topics recommended by the AHA. Russell and experts at U-M were involved in updating the Michigan pre-participation physical form available from the Michigan Department of Community Health. The updated form conforms to the AHA guidelines and will help improve the screening process.

Making sure that all Michigan schools, public and private, use the new forms and that the screenings are performed by physicians familiar with the guidelines is an important next step.

“Simply improving pre-participation screening forms and conducting electrocardiograms on properly selected children and adults may help reduce cardiac deaths,” says Sharlene M. Day, M.D., director of the Hypertrophic Cardiomyopathy Clinic at the U-M Cardiovascular Center. “It is also very important for athletes, their families, and their coaches to recognize potential warning signs, like a seizure, passing out, or shortness of breath.”

Yet there is still more that can be done to try to reduce the incidence of sudden cardiac death.

U-M experts support having automated external defibrillators available in schools and training coaches and other school personnel on use and maintenance of the devices. Yearly training in basic life support or CPR for coaches and trainers will help them respond as quickly as possible in an emergency.

Emergency response training programs will have the added benefit of not only improving a school’s ability to respond to an emergency that occurs on the sports field but to any emergencies that occur on school property. It will also prepare individuals who will take their emergency response skills to their home and to their community.