The risk of coronary heart disease in middle age is moderately higher for men and women who grew up in adverse family settings, according to a new analysis of medical records and surveys of more than 3,500 people. 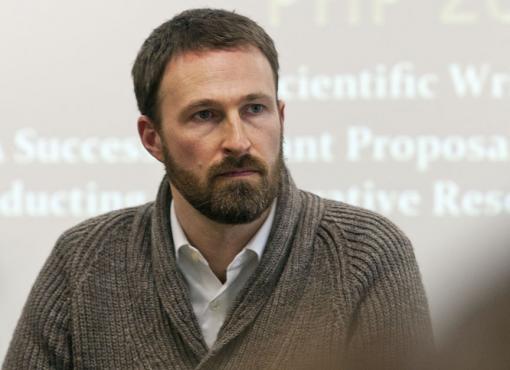 PROVIDENCE, R.I. [Brown University] — For all the ills that result from bad parenting, new evidence from an epidemiological study of thousands of people suggests coronary heart disease (CHD) might be added to that list.

“We often think about how the early family psychosocial environment influences the mental health of kids,” said Eric Loucks, assistant professor of epidemiology in the Warren Alpert Medical School of Brown University. “The fact that it may be important for chronic diseases, like heart disease, hasn’t been thought of as much.”

Loucks’ newly published analysis of the health records and childhood descriptions of 3,554 adults has found an association between certain kinds of childhood mistreatment and a moderately elevated risk of CHD in middle age. A paper describing the research is published July 22 in the journal Psychosomatic Medicine. The paper further confirms a link found in a few other differently designed studies.

Specifically, for every extra point a study participant registered on a 21-point “risky family score,” their risk of CHD between the ages of 40 and 50 rose 1 percent. For instance, if one man had a childhood that was 5 points worse on the scale than the average man in the study, his CHD risk over the next 10 years would be 5.36 percent compared to the average man’s 5.1 percent risk.

The risky family score comes from a seven-question survey that quizzed participants on how often various conditions, such as physical or verbal abuse or gestures of love and support, occurred in childhood. That information was considered alongside the Framingham risk algorithm, which uses physiological indicators to determine CHD risk 10 years out.

Loucks’ team probed the data more deeply to determine which aspects of health and lifestyle might connect, at least statistically, a bad childhood and shakier heart health. For women he found evidence that low education levels, low income, depressive symptoms and anger may be mechanisms linking the risky family score with CHD risk. For men the only factor that seemed statistically significant as a potential mechanism was education. The CHD risk factors (that were components of the Framingham risk algorithm) most strongly correlated with risky family score were smoking for men, and smoking and HDL cholesterol for women.

The team also drilled into the numbers to see which aspects of upbringing had significant effects and again found gender differences. Among women, CHD score was most affected by physical abuse, verbal mistreatment, poor parental monitoring and poor household organization and management. For men, abuse didn’t matter as much as neglect, in that only the latter two conditions (poor monitoring and organization) mattered to CHD risk.

“It’s not just the really extreme circumstances, such as abuse and neglect, but also maybe day-to-day things such as parental monitoring that seemed to be important,” he said. “One of the big drivers was smoking. Think of a kid whose parents aren’t monitoring him so much. That could quite easily allow him to try smoking. Smoking is highly addictive, and so can easily continue into adulthood. Smoking is one of the major risk factors for heart disease.”

More research is needed to determine how these particular family dynamics could ultimately contribute to CHD, Loucks said, but the emerging idea that growing up in a troubled household could lead to physical ills should be of interest to policymakers.

“We have all these programs to help at-risk families and we do that because it could influence kids’ mental health or development,” he said. “This kind of body of work is suggesting it may also influence their risk for chronic disease. This is one more reason why it’s important to think about helping at-risk kids.”