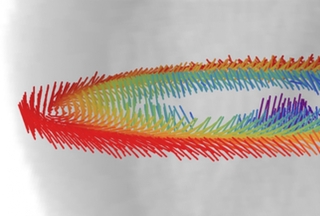 The human heart can be viewed as both a mechanical and an electrical device – one that contracts and pumps billions of times over an average lifespan. How does it manage to achieve this feat without lapsing into dangerous irregularities?
New research by McGill University scientists finds that the answer lies in the particular geometry of the muscle fibres of the heart wall. A collaboration led by McGill Professor Kaleem Siddiqi had shown in a 2012 study that bundles of heart muscle cells bend and twist together in a geometrical pattern known as a “generalized helicoid” – an arrangement known to provide mechanical strength in biological materials such as insect cuticle.
In a new paper, published May 8 in the journal Scientific Reports, Siddiqi and his students from McGill’s School of Computer Science and the Centre for Intelligent Machines used mathematical modeling and analysis to demonstrate that this arrangement of fibres also helps heart tissue conduct electrical signals reliably. The lead author of the article, Tristan Aumentado-Armstrong, was a McGill undergraduate at the time the research was carried out. “Cardiac tissue is unique in that mechanical resilience must coexist with active contraction and signal propagation,” Siddiqi says. “Our analysis shows that nature has used helicoidal geometry to satisfy both the electrical and mechanical requirements of the heart.”
“Conduction in the Heart Wall: Helicoidal Fibers Minimize Diffusion Bias,” Tristan Aumentado-Armstrong et al. Scientific Reports, published online May 8, 2018. DOI:10.1038/s41598-018-25334-7 https://www.nature.com/articles/s41598-018-25334-7.pdf
IMAGE: The helicoidal orientation of fibres in a ventricle wall is shown in bright colours, based on diffusion magnetic resonance imaging of a rat’s heart tissue. CREDIT: Shape Analysis Group/McGill University