A family of proteins named after Popeye play an essential role in allowing the heart to respond to stress, according to a study published today in the Journal of Clinical Investigation. The finding could help scientists develop new treatments for abnormal heart rhythms.

Popeye domain containing proteins (Popdc for short) were discovered 10 years ago and named because they are found in abundance in muscles, but until now their function has been unclear. The new study reveals that they help the heart to increase its rhythm in response to the hormone adrenaline, which is released in times of mental or physical stress.

In healthy people and mice, the heart’s natural pacemaker responds to adrenaline by making the heart beat faster in order to deliver more oxygen around the body. But in the mice that lacked Popdc, the heart rate slowed when they were put in stressful situations.

Many elderly people’s heart rates slow down in a similar way in response to stress. These people may be diagnosed with a condition called sick sinus syndrome, which normally means they need to have an artificial pacemaker fitted. The researchers anticipate that the findings might lead to new treatments for this and other heart rhythm disorders that can be triggered by stress, such as arrhythmias, atrial fibrillation and sudden cardiac death. 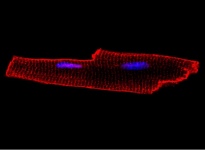 Professor Thomas Brand, from the National Heart and Lung Institute at Imperial College London, who led the study, said: “Many elderly people have problems with the natural pacemaker in their heart that can be triggered by stress, but we still know little about the exact mechanics of the heart’s response. These findings show that in mice, Popdc proteins have an important function in regulating the heart’s rhythm and it is reasonable to deduce that the same is true in humans. Mice with mutations in the genes for these proteins have the same abnormal stress responses as some elderly people do.

“Studying these mice further will give us more clues about what goes wrong in the heart’s pacemaker, and might help us develop new drugs for heart rhythm disorders. We also plan to look at the Popdc genes in people with sick sinus syndrome, to see whether mutations there might be connected to the condition.”

Popdc is located in the outer membrane of the heart’s specialised pacemaker cells. The researchers found that Popdc interacts with a signalling molecule triggered by adrenaline, known as cAMP, and that this changes the electrical properties of the cell membrane. They think that this might be the mechanism by which adrenaline influences the heart’s rhythm.

“During exercise, the heartbeat can increase by three times over its resting rate, enabling the muscles to work harder,” Professor Brand said. “This is mainly brought about by adrenaline, but how adrenaline acts on the heart’s cells is not fully understood. This study helps us understand the mechanism by which the heart adapts to stress.”

The research was funded by Deutsche Forschungsgemeinschaft, the Interdisciplinary Center for Clinical Research, and Fondation Leducq.

2. Professor Thomas Brand will give his inaugural lecture, entitled ‘Form and function of the developing heart’, at 5:30pm on Thursday 23 February at Imperial College London, South Kensington Campus. Find more details and register in advance on the event webpage.

Consistently rated amongst the world’s best universities, Imperial College London is a science-based institution with a reputation for excellence in teaching and research that attracts 14,000 students and 6,000 staff of the highest international quality. Innovative research at the College explores the interface between science, medicine, engineering and business, delivering practical solutions that improve quality of life and the environment – underpinned by a dynamic enterprise culture.

Since its foundation in 1907, Imperial’s contributions to society have included the discovery of penicillin, the development of holography and the foundations of fibre optics. This commitment to the application of research for the benefit of all continues today, with current focuses including interdisciplinary collaborations to improve global health, tackle climate change, develop sustainable sources of energy and address security challenges.

In 2007, Imperial College London and Imperial College Healthcare NHS Trust formed the UK’s first Academic Health Science Centre. This u nique partnership aims to improve the quality of life of patients and populations by taking new discoveries and translating them into new therapies as quickly as possible.