With a sophisticated X-ray analysis, a US-German team of scientists has solved the molecular structure of an important regulator for blood pressure in the human body. The study, appearing in this week’s edition of the journal Cell, gives new insights into the function of this regulator and could aid the development of new medication with less side-effects, as the team led by Prof. Vadim Cherezov from the University of Southern California explains. High blood pressure is the most common cardiovascular condition in industrialised countries. 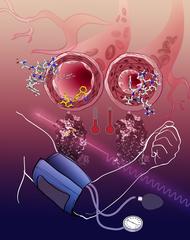 But how these drugs work on the molecular level was not exactly understood until now, as DESY scientist and co-author Cornelius Gati from the Center for Free-Electron Laser Science CFEL points out. “Despite its medical relevance, the structure of this receptor was unknown up to now.“ CFEL is a cooperation of DESY, the Max Planck Society and the University of Hamburg.

To solve molecular structures with X-rays, the molecules have to be grown into crystals first. From the way that these crystals diffract the X-rays, the spatial structure of the molecules can be calculated. But many proteins can hardly be grown into crystals as this state contradicts their natural function. “The crystals of AT1R that we obtained were needle-like and too small for structure determination by traditional crystallography,” says Cherezov.

Only the intense flashes of the X-ray laser produced sufficiently strong diffraction patterns to elucidate the structure of the molecules in the tiny crystals. The researchers used AT1R crystals where an antagonist called ZD7155 did already bind to the receptor. ZD7155 is a chemical precursor to one of the most common ARB.

This way the scientists could investigate the detailed structure of a blocked receptor. The results reveal the molecular layout of the receptor with a resolution of 0.29 nanometres (millionths of a millimetre). That is in the order of atoms. “The data show the exact structure of the binding pocket and the interaction with blood pressure drugs binding there”, explains Gati who processed the X-ray data. “This provides new insights into the mode of action and facilitates the development of new drugs.”

The angiotensin receptor belongs to the medically important class of G protein coupled receptors (GPCR). GPCR are embedded in the cell membrane and trigger an activity within the cell upon recognition and binding of a variety of different signaling molecules. These kind of trans membrane receptors are of great interest to the pharmaceutical industry as they allow to interfere with the organism’s function without actually bringing a drug into the cell.

As many other GPCRs, the angiotensin receptor signals through G protein and arrestin-mediated pathways. “Blocking G protein pathway is beneficial, while blocking arresting pathway is detrimental, leading to many side-effects,” explains Cherezov. “All current ARBs on the market block both pathways.”

The scientists hope that the exact knowledge of the molecular receptor structure can help to design tailor-made blood pressure drugs with lower side-effects. “Our work represents a first step in this direction,” says Cherezov. “Next we plan to decipher structures of this receptor in complex with full and arrestin-biased agonists, as well as determine the structure of the closely related angiotensin receptor type 2 or AT2R.” 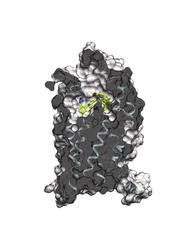 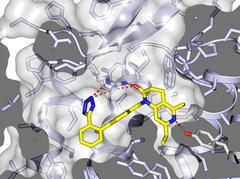