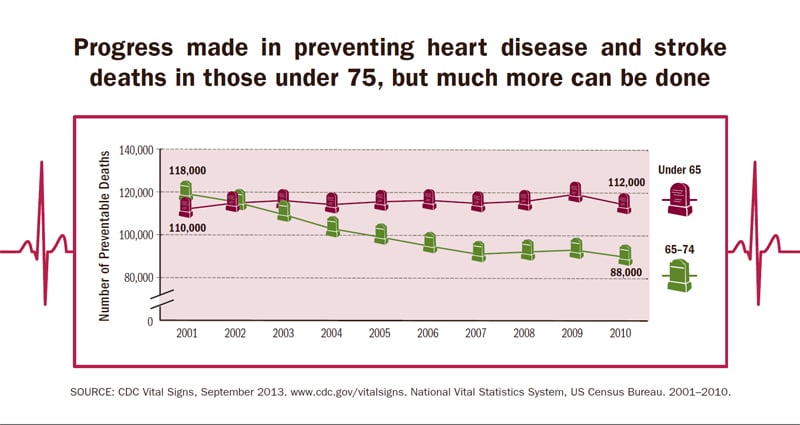 Infographic: “Progress made in preventing heart disease and stroke deaths in those under 75, but much more can be done”
Text Version

More than 200,000 preventable deaths from heart disease and stroke occurred in the United States in 2010, according to a new Vital Signs report from the Centers for Disease Control and Prevention.  More than half of these deaths happened to people younger than 65 years of age.

The report looked at preventable deaths from heart disease and stroke defined as those that occurred in people under age 75 that could have been prevented by more effective public health measures, lifestyle changes or medical care.

Cardiovascular diseases, including heart disease and stroke, kill nearly 800,000 Americans each year or one in three deaths.  However, the report notes that most cardiovascular disease can be managed or prevented in the first place by addressing risk factors.

“Despite progress against heart disease and stroke, hundreds of thousands of Americans die each year from these preventable causes of death,” said CDC Director Tom Frieden, M.D., M.P.H. “Many of the heart attacks and strokes that will kill people in the coming year could be prevented by reducing blood pressure and cholesterol and stopping smoking.”

Key facts in the Vital Signs report about the risk of preventable death from heart disease and stroke:

The overall rate of preventable deaths from heart disease and stroke went down nearly 30 percent between 2001 and 2010, with the declines varying by age.  Lack of access to preventive screenings and early treatment for high blood pressure and high cholesterol could explain the differences among age groups.  Through the Affordable Care Act, more Americans will have access to health coverage and preventive care, including young people and other medically underserved groups.

To save more lives from these preventable deaths, doctors, nurses, and other health care providers can encourage healthy habits at every patient visit, including not smoking, increasing physical activity, eating a healthy diet, maintaining a healthy weight, and taking medicines as directed.  Providers should track patient progress on the ABCS of heart health — aspirin when appropriate, blood pressure control, cholesterol management, and smoking cessation.  Health care systems can adopt and use electronic health records to identify patients who smoke or who have high blood pressure or high cholesterol and help providers follow and support patient progress.

Communities and health departments can help by promoting healthier living spaces, including tobacco-free areas and safe walking areas. Local communities also can ensure access to healthy food options, including those with lower sodium.

to learn more about Million Hearts, a national initiative that aims to prevent 1 million heart attacks and strokes in the U.S. by 2017 by focusing on improving clinical care and community prevention strategies.