ANN ARBOR, Mich. — It was called the biggest comeback in Big House history when Leo Staudacher, 71, suffered cardiac arrest at the 2011 University of Michigan-Notre Dame game, and by the fourth quarter was watching the final minutes of the game from his hospital bed. 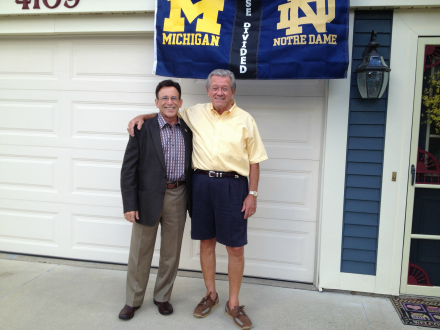 As a sports writer said back then, luckily for Staudacher, a Notre Dame fan, when someone asks “Is there a doctor in the Big House?,” folks spring into action like a two-minute offense.

Two years later, Staudacher is 25 pounds lighter, more devoted to healthy habits and no longer considers U-M a rival – not even Saturday when the Wolverines take on the Irish at 8 p.m.

“I’ve kept my promise too and I’ve never pulled against University of Michigan,” says Staudacher. “I owe so much to the U of M. Notre Dame is in my DNA, but Michigan is in my heart.”

Shortly into the second quarter, Staudacher — who said he’d never had any signs of heart issues — started feeling discomfort.

“It felt like really bad heartburn and it was screwing its way through me,” he told a local newspaper. “I thought, ‘Man, I shouldn’t have eaten that brat.’

“But then I got really tired and my arms started feeling like cement and I thought ‘This sounds an awful lot like a heart attack, but it can’t be.’ And that’s the last thing I remember.”

Staudacher was having a heart attack. Marvin Sonne, a dentist from Trenton and a U-M grad, was the first to respond, immediately performing CPR.  Jan Tardiff, a nursing supervisor at Bay Regional Medical Center, came rushing from a few rows away.

An HVA team and U-M emergency medicine physicians on duty at the stadium helped stabilize Staudacher for transport to the University of Michigan Frankel Cardiovascular Center, using a defibrillator three times to shock his heart into a normal rhythm.

Once at the Cardiovascular Center, interventional cardiologist Stanley J. Chetcuti, M.D., and a catheterization team opened Staudacher’s blocked artery with emergency angioplasty. From his hospital bed, Staudacher was able to watch the final touchdowns that led to a U-M win.

Many well-wishers followed Staudacher’s story including U-M head football coach Brady Hoke who sent a note to Staudacher’s Bay City area home. Staudacher won’t make it to Ann Arbor for this year’s game but ironically Chetcuti is on-call at the Cardiovascular Center.

“I still come down to see Dr. Chetcuti once a year (for a check-up),” says Staudacher. “I tell him that heart attack was the best thing that’s happened. I walk a half marathon a week, 13 miles, and I’ve lost 25 pounds. I’m feeling great.”

What should you do if you suspect a heart attack?

Some heart attacks are sudden and intense. But most start slowly, with mild pain and discomfort. If you’re having heart attack symptoms, get help right away.