ANN ARBOR, Mich. – A landmark heart valve trial that included patients from the University of Michigan Frankel Cardiovascular Center showed positive results for those whose lives were impaired by aortic stenosis.

The clinical trial evaluated a new transcathether valve – the Medtronic CoreValve® System – and revealed some of the lowest stroke rates ever reported.

The University of Michigan is one of 40 sites in the U.S. to enroll patients in the extreme risk study of the trial – patients with severe aortic stenosis who were too ill to have their aortic valves replaced through traditional open heart surgery. One year after receiving a CoreValve implant, nearly three-quarters of patients were alive without a major stroke, which is highly significant given their complex medical conditions.

The rate of stroke – one of the complications physicians and patients fear most because it increases mortality and affects quality of life – was 2.4 percent, and it remained low over time with a one-year rate of 4.1 percent, according to results released in a late-breaking clinical trial session at TCT 2013. 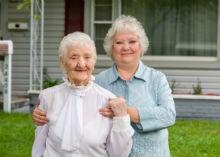 Read more about patient Genevieve,
left, of Dearborn Heights, Mich. who
had the TAVR procedure at the U-M.

The emergence of TAVR procedures in the U.S. is providing new hope for high-risk aortic patients. The procedures allow access to the diseased aortic valve percutaneously, meaning through the skin, usually through an artery in the leg, rather than through open surgery.

The U-M offers both options and recently celebrated performing its 200th TAVR procedure.

When it comes to the potentially transformative procedures, the U-M has performed more than any other Michigan hospital and is among the tops in the nation.

Approximately 300,000 people worldwide who suffer from severe narrowing of their aortic valves, which prohibits blood from efficiently pumping from their heart to the body. One-third of these patients are deemed too ill or frail to undergo open-heart surgery. Without treatment, these patients have a 50 percent chance of death within one year.

In the CoreValve study, 471 patients received the replacement valve, which was delivered through the femoral artery in the leg, threaded through arteries and across the aorta, and deployed in the native aortic valve.

Once in place, the CoreValve System is designed to take over the native valve’s function and ensure that oxygen-rich blood flows into the aorta and circulates throughout the body.

To learn more about aortic valve replacement at the University of Michigan go to our website at www.umcvc.org.