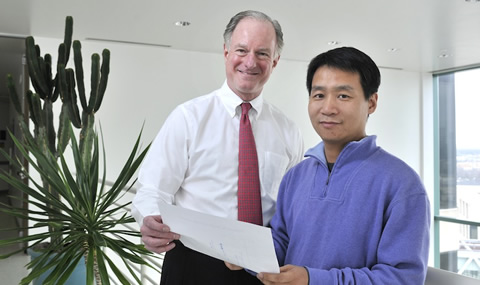 Dr. Joseph A. Hill, (left) Chief of Cardiology and senior author of the study, and Dr. Zhao Wang, a postdoctoral research fellow and the study’s first author.

On one end of the cascade is the so-called Unfolded Protein Response (UPR), and at the other end are numerous proteins with modified glucose molecules attached to them. For years, researchers have made countless observations relating to these opposite ends of the spectrum. Now, researchers at UT Southwestern have discovered a pathway that links these two disparate biological occurrences, which could open the door for new types of treatment.

“Our findings uncover the direct coupling of these two important pathways and raise the prospect of therapeutic manipulation of the UPR to lessen the damage caused by heart attack and stroke,” said Dr. Joseph A. Hill, Professor of Internal Medicine and Molecular Biology, and senior author of the study published in the March 13 issue of Cell.

The work by Dr. Hill’s team uncovers a previously unrecognized progression following ischemia (when a tissue is deprived of oxygen and nutrients) and reperfusion (when that supply is restored, either spontaneously or therapeutically). Ischemia/reperfusion injury underlies health issues such as heart attack, stroke, and numerous other ailments including diseases of the kidney, liver, skeletal muscles, and more.

When someone suffers a heart attack, it triggers the process of the UPR inside myocytes (heart cells). A link between ischemia/reperfusion and UPR has been suggested previously, but compelling evidence was absent until the Cell study emerged.

Of the three pathways activated within the UPR, the new work implicates IRE1, which produces a molecule called spliced X-box binding protein 1 (Xbp1s), as a direct activator of the hexosamine biosynthetic pathway (HBP). The HBP is responsible for producing modified glucose molecules that couple to numerous proteins, leading to beneficial changes in their function, stability, and location within the cell. This coupling, termed O-GlcNAcylation, has favorable effects on disease-injured cells, including myocytes.

“We discovered a linear cascade downstream of ischemia/reperfusion that involves UPR activation, elicitation of Xbp1s, consequent activation of the HBP, and robust cardioprotection,” said Dr. Hill, also the Chief of the Division of Cardiology and Director of the Harry S. Moss Heart Center. “It is the first time that researchers have been able to unveil a clear pathway leading to significant cardioprotection, often thought of as the ‘holy grail’ of cardiology.”

While it is clear that the O-GlcNAcylation process protects the heart, we still do not understand how protection is mediated, notes Dr. Hill.

“However, now we know what turns the process on, a finding that points the way to future research and possibly new therapeutic means by which to safeguard the heart,” he said.

The study, undertaken by Dr. Zhao Wang, postdoctoral research fellow and first author of the paper, directly raises the question of whether Xbp1s can be manipulated therapeutically. If the body is able to produce more Xbp1s, then doing so would enhance the heart’s ability to withstand a heart attack. In fact, using mice engineered to have extra copies of Xbp1s in the heart, Dr. Wang initiated heart attacks that were ultimately smaller and less harmful to the host. Conversely, when he deleted the gene altogether and initiated heart attacks, the effects were much larger and more harmful to the carrier.

“If we can find a way to enhance Xbp1s in the heart, it could be a very significant medical advancement,” Dr. Hill said. “At this juncture, however, we’re extremely pleased to have uncovered a major pathway that leads to protecting the heart in the face of danger.”

The research was supported by grants from the National Institutes of Health, the Cancer Prevention and Research Institute of Texas, the American Heart Association–DeHaan Foundation, the Fondation Leducq, and the American Diabetes Association.