ANN ARBOR, Mich. —  Could it be that when Ludwig van Beethoven composed some of the greatest masterpieces of all time that he was quite literally following his heart? 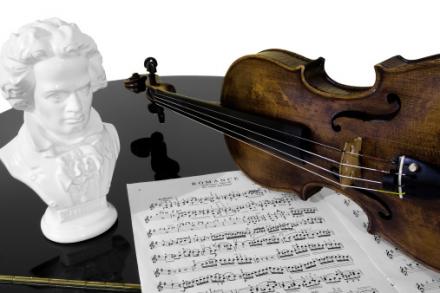 The striking rhythms found in some of Beethoven’s most famous works may have been inspired by his own heartbeat, says a team of researchers from the University of Michigan and University of Washington that includes a cardiologist, medical historian, and musicologist.

Authors of an essay that appears in Perspectives in Biology and Medicine analyzed several of Beethoven’s compositions for clues of a heart condition some have speculated he had. The rhythms of certain parts of renowned works, researchers say, may in fact reflect the irregular rhythms of Beethoven’s own heart caused by cardiac arrhythmia.

“His music may have been both figuratively and physically heartfelt,” says co-author Joel Howell, M.D., Ph.D, a professor of Internal Medicine at the University of Michigan Medical School and member of the U-M Institute for Healthcare Policy and Innovation. “When your heart beats irregularly from heart disease, it does so in some predictable patterns. We think we hear some of those same patterns in his music.”

“The synergy between our minds and our bodies shapes how we experience the world.  This is especially apparent in the world of arts and music, which reflects so much of people’s innermost experiences,” Howell adds.

The essay’s lead author is Zachary D. Goldberger, M.D., M.S., a cardiologist at Harborview Medical Center, University of Washington School of Medicine and a former cardiology fellow and Robert Wood Johnson Clinical Scholar at U-M. Steven Whiting, Ph.D, a musicologist and Beethoven expert from the U-M School of Music, Theatre and Dance, is the other author. 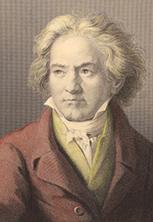 The team studied the rhythmic patterns of several compositions that may reflect Beethoven’s experience of an arrhythmia, a condition that causes the heart to beat too fast, too slow, or with an irregular rhythm. Sudden, unexpected changes in pace and keys in Beethoven’s music appear to match such asymmetrical patterns.

Take for example the final movement “Cavatina” in Beethoven’s String Quartet in B-flat Major, Opus 130, an emotionally-charged piece that Beethoven said always made him weep. In the middle of the quartet, the key suddenly changes to C-flat major, involving an unbalanced rhythm that evokes dark emotion, disorientation and what has even been described as a “shortness of breath.”

In the composer’s directions to musicians playing the piece, the section is marked beklemmt, a German word that translates to “heavy of heart.”

Authors note that “heavy of heart” could mean sadness but may also describe the sensation of pressure, a feeling that is associated with cardiac disease. “The arrhythmic quality of this section is unquestionable,” they write.

Researchers identified arrhythmic patterns in other pieces as well. They studied the Piano Sonata in A-flat major, Opus 110 – the central sonata in a group of three that comprise Beethoven’s final contributions to the genre – and the opening of the “Les Adieux” Sonata (sonata opus 81a, in E-flat major) written during the French attack on Vienna in 1809.

Beethoven has been linked with a litany of mysterious health problems including inflammatory bowel disease, Paget’s disease (abnormal bone destruction), liver disease, alcohol abuse, and kidney disease. His most often described ailment was deafness, which the authors say could have heightened his other senses and made him even more aware of his heartbeat.

“We can’t prove or disprove that Beethoven had many of the diseases he’s been supposedly afflicted with because almost all of today’s diagnostic medical tests didn’t exist in the 18th century, and we are interpreting centuries-old medical descriptions into the context of what we know now,” says Goldberger.

“However, the symptoms and common association of an abnormal heartbeat with so many diseases makes it a reasonable assumption that Beethoven experienced arrhythmia – and the works we describe may be ‘musical electrocardiograms,’ the readout of modern heart rhythm testing equipment.

“While these musical arrhythmias may simply manifest Beethoven’s genius, there is a possibility that in certain pieces his beating heart could literally be at the heart of some of the greatest masterpieces of all time.”

Other affiliations: Howell is also a professor in the U-M Department of History and Department of Health Management and Policy in the U-M School of Public Health and member of the IHPI. Goldberger is an Assistant Professor of Medicine in the Division of Cardiology at the University of Washington School of Medicine.