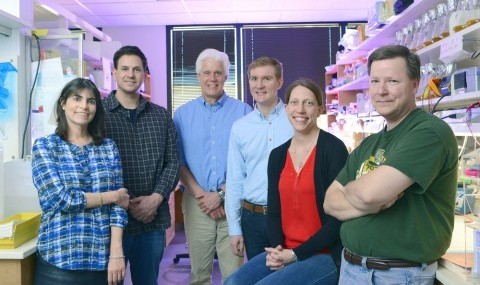 DALLAS   – Researchers at UT Southwestern Medical Center have identified a previously unrecognized small protein in cells of the human heart that plays a key role in heart muscle contraction. The protein is made from an RNA that was previously believed to be a blank or non-coding RNA, suggesting there may be many other small “non-coding” segments that play important biological roles.

Significantly, the findings published today in Science offer a potential new target for developing therapeutics to boost the strength of cardiac muscle contractions in patients with heart failure, a chronic condition in which the heart pumps too weakly to supply adequate oxygen to the body.

The new protein, which the researchers have named dwarf open reading frame (DWORF), comprises just 34 amino acids, making it the third smallest protein known to be encoded in the mouse genome. By comparison, an average-sized protein is 10 times larger, including about 350 amino acids. DWORF is also encoded in the human genome.

The DWORF protein stimulates a calcium-ion pump that controls muscle contraction. As DWORF increases, the heart pumps with more force.

“There’s a brake in the heart that controls pumping, and DWORF shuts off the brake, which has the effect of making heart muscle pump more vigorously,” said senior author Dr. Eric Olson, Chairman of the Molecular Biology, and Director of the Hamon Center for Regenerative Science and Medicine at UT Southwestern.

DWORF was found among a class of RNA transcripts that had been dismissed by scientists as non-coding RNA, sometimes colloquially called “junk” RNA. Emerging evidence, however, such as the discovery of DWORF, indicates that many small proteins with bioactive properties are hidden among these regions of the genome that are thought to be non-coding and, due to their small size, have evaded detection by scientists.

“Although small and non-enzymatic themselves, peptides like DWORF have the ability to regulate the function of much larger molecular complexes, analogous to the way that a tiny rudder determines the direction of a much larger ship,” said Dr. Catherine Makarewich, a postdoctoral fellow in Dr. Olson’s lab and a co-lead author of the study.

“Elucidating the full catalog of small proteins like DWORF could provide significant new insight into how the molecular machinery of the cell is regulated,” added Benjamin Nelson, a student in UT Southwestern’s Medical Scientist Training Program and co-lead author of the study.

“We dipped into the RNA ‘junk’ pile and came up with a hidden treasure,” said Dr. Rhonda Bassel-Duby, Professor of Molecular Biology and a study author.

UT Southwestern, one of the premier academic medical centers in the nation, integrates pioneering biomedical research with exceptional clinical care and education. The institution’s faculty has included six who have been awarded Nobel Prizes since 1985. The faculty of almost 2,800 is responsible for groundbreaking medical advances and is committed to translating science-driven research quickly to new clinical treatments. UT Southwestern physicians provide medical care in about 80 specialties to more than 92,000 hospitalized patients and oversee approximately 2.2 million outpatient visits a year.