Researchers at Brown University have learned how muscles and tendons in the legs deal with sudden impacts. Experiments showed that tendons absorb the initial burst of energy from impact before the leg muscles react. The tendons act as shock absorbers, protecting the leg muscle from damage at the moment of impact. Results are published in the Proceedings of the Royal Society B. 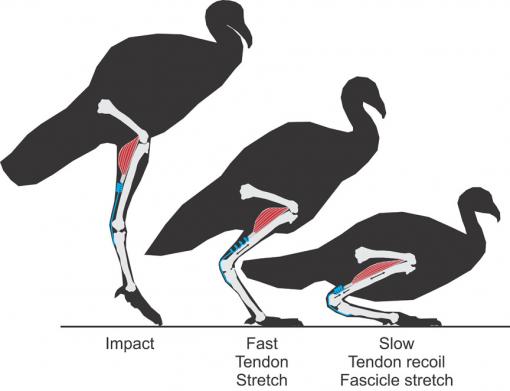 PROVIDENCE, R.I. [Brown University] — Anyone who has hiked down a mountain knows the soreness that comes a day or two after means the leg muscles have endured a serious workout. While the pain is real, it’s not well understood how leg muscles cope with the force from such movement.

Now researchers at Brown University have documented how muscles and tendons work in concert first to store and then to rid themselves of energy and heat. They found that tendons take on the role of shock absorbers at the time of impact. About a tenth of a second later, the fibrous bundles in skeletally connecting muscles, known as fascicles, absorb the remaining energy. The tendons’ role is crucial, the Brown researchers write in the journal Proceedings of the Royal Society B, because they help protect the fascicles against damage from the rapid burst of energy and power generated by the impact.

“Something has to take up the slack, and it falls to the tendon,” said Nicolai Konow, a postdoctoral researcher in the Department of Ecology and Evolutionary Biology at Brown and the lead author on the paper. “The good news is it’s elastic enough to do that.”

The research underscores the critical role that tendons play as shock absorbers in activity involving skeletal muscles, which could refine the development of synthetic tendons and improve rehabilitative practices after tendon reconstructive surgery. The research may cross into biomimetics, used to make two-legged robot locomotion more similar to human locomotion, for example. It could even help in athletic training.

“We used to think that all of the motion of the body could be explained just from the action of our muscle motors,” said Thomas Roberts, associate professor of biology in the Department of Ecology and Evolutionary Biology, who specializes in animal movement. “It is becoming increasingly apparent that springy tendons are a big part of what makes us go.”

To determine how muscles and tendons work in tandem, the researchers studied turkeys, whose legs, perhaps surprisingly, have a muscle-tendon structure similar to humans and whose walking posture (with the legs under the body) largely mimics our own. The researchers outfitted turkeys with special sonar sensors embedded in a calf muscle that recorded changes in muscle fascicle length at 1,000 times per second as the turkey landed from a jump. Other devices measured the force on the muscle from landings, while a slow-motion video camera caught the changes in leg configuration upon landing to understand how muscles and tendons were flexed and stretched.

The researchers focused on two main periods. One, called the force rise, began when the turkey landed. The researchers were surprised to see that muscle fascicle length remained essentially the same. That means, Konow explained, that the jolt of the impact was being absorbed somewhere else: in the tendon. The researchers believe there is a biological reason for this. To protect themselves from the energy generated at the moment of landing, the fascicles leave the impact to the tendons, which stretches like a spring. In fact, electrical pulses recorded in the fascicles indicate the muscle steeled itself against the landing even before the turkey jumped. “The muscle is pre-activating prior to impact, to increase stiffness, to resist being forcibly lengthened,” Konow said.

Following the jolt of landing comes a period the authors call force decay. During force decay, the tendon recoils to its original length, releasing the energy it had accepted during the landing. “That means the tendon is shunting energy to something that’s lengthening,” Konow said, “and that’s the fascicles. The fascicles are sensing that the force (from impact) is going down and it’s safer to lengthen to absorb the energy.” The researchers documented an approximately 20 percent lengthening of the fascicles during the force decay period.

“We can say that in real ways, the muscle has a safety net with the tendon there and protecting it,” Konow said.

Roberts and Emanuel Azizi, a former postdoctoral researcher at Brown now at the University of California–Irvine, contributed to the paper. The National Institutes of Health, funded the research through a grant to Roberts.