The study, published in the online edition of Human Molecular Genetics, sets the stage for further investigations into fisetin’s neuroprotective properties in Huntington’s and other neurodegenerative conditions.

Huntington’s disease (HD) is an inherited disorder that destroys neurons in certain parts of the brain and slowly erodes victims’ ability to walk, talk and reason. It is caused by a kind of genetic stutter, which leads to the expansion of a trinucleotide repeat in the huntingtin protein. When the length of the repeated section reaches a certain threshold, the bearer will develop Huntington’s disease. In fact, the longer the repeat, the earlier symptoms develop and the greater their severity.

One of the intracellular signaling cascades affected by mutant huntingtin is the so-called Ras/ERK pathway. It is activated by growth factors and is particularly important in brain development, learning, memory and cognition.

In earlier studies, Pamela Maher, Ph.D., a senior staff scientist in the Salk Cellular Neurobiology Laboratory, had found that fisetin exerted its neuroprotective and memory-enhancing effects through the activation of the Ras/ERK signaling pathway. “Because Ras/ERK is known to be less active in HD, we thought fisetin might prove useful in the condition,” Maher says.

Maher and her team began their study by looking at a nerve cell line that could be made to express a mutant form of the huntingtin protein. Without treatment, about 50 percent of these cells will die within a few days. Adding fisetin, however, prevented cell death and appeared to achieve it by activating the Ras-ERK cascade. 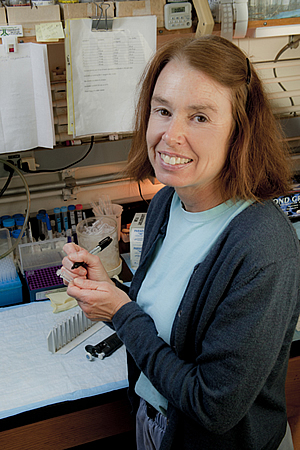 The researchers then turned their attention to Drosophila. In collaboration with J. Lawrence Marsh, Ph.D., a professor of developmental and cell biology at the University of California, Irvine, Maher tested fisetin in fruit flies overexpressing mutant huntingtin in neurons in the brain. The affected flies don’t live as long as normal flies and also have defective eye development. When they were fed fisetin, however, the HD flies maintained their life span and had fewer eye defects.

“Fisetin was not able to reverse or stop the progress of the disease,” Maher notes, “but the treated mice retained better motor function for longer, and they lived longer.”

Fisetin, which also has anti-inflammatory properties and maintains levels of glutathione, a major cellular antioxidant that plays a key role in protecting against different types of stress in cells, has not yet been tested in humans. But Maher’s findings suggest that the compound may be able to slow down the progression of Huntington’s disease in humans and improve the quality of life for those who have it. While she cautions that it won’t necessarily be effective for people already in the advanced stages of the disease, for those in the early stages or who are presymptomatic, fisetin might help.

Furthermore, once their safety and efficacy are proved in humans, the advent of substances like fisetin might prompt more people to be tested for the mutation. “Cells are damaged and dying before there are overt symptoms,” Maher says. “If patients know they have the mutation, then they could potentially start treatment before they start showing symptoms, which might be more effective than waiting for the symptoms to appear, as many do now.”

Maher’s lab has developed a variety of fisetin derivatives that are more potent in cell-based assays than the fisetin used in the study, and she plans further tests to see which combination is most effective in HD and other neurodegenerative disorders.

In the meantime, does she recommend eating a lot of strawberries to gain fisetin’s benefits?

“It probably couldn’t hurt,” she says.

In addition to Maher and Marsh, Richard Dargusch of the Salk Institute and Laszlo Bodai, Paul Gerard and Judy Purcell of the University of California, Irvine, contributed to the study.

This work was supported in part by the National Institutes of Health.

About the Salk Institute for Biological Studies
The Salk Institute for Biological Studies is one of the world’s preeminent basic research institutions, where internationally renowned faculty probe fundamental life science questions in a unique, collaborative, and creative environment. Focused both on discovery and on mentoring future generations of researchers, Salk scientists make groundbreaking contributions to our understanding of cancer, aging, Alzheimer’s, diabetes, and infectious diseases by studying neuroscience, genetics, cell and plant biology, and related disciplines.