New role for an old molecule: protecting the brain from epileptic seizures

In new research on tadpoles, which share similar brain chemistry with humans, putrescine emerges as a calming influence that conveys resistance to subsequent seizures. In the long run, the discovery could aid in developing drugs for young children with epilepsy. 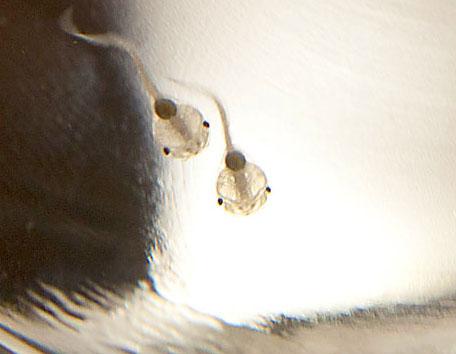 PROVIDENCE, R.I. [Brown University] — For years brain scientists have puzzled over the shadowy role played by the molecule putrescine, which always seems to be present in the brain following an epileptic seizure, but without a clear indication whether it was there to exacerbate brain damage that follows a seizure or protect the brain from it. A new Brown University study unmasks the molecule as squarely on the side of good: It seems to protect against seizures hours later.

Putrescine is one in a family of molecules called “polyamines” that are present throughout the body to mediate crucial functions such as cell division. Why they surge in the brain after seizures isn’t understood. In a lengthy set of experiments, Brown neuroscientists meticulously traced their activity in the brains of seizure-laden tadpoles. What they found is that putrescine ultimately converts into the neurotransmitter GABA, which is known to calm brain activity. When they caused a seizure in the tadpoles, they found that the putrescine produced in a first wave of seizures helped tadpoles hold out longer against a second wave of induced seizures.

Carlos Aizenman, assistant professor of neuroscience and senior author of a study published in the journal Nature Neuroscience, said further research could ultimately produce a drug that targets the process, potentially helping young children with epilepsy. Tadpoles and toddlers aren’t much alike, but this basic aspect of their brain chemistry is.

“Overall, the findings presented in this study may have important therapeutic implications,” Aizenman and co-authors wrote. “We describe a novel role for polyamine metabolism that results in a protective effect on seizures induced in developing animals.”

The result that “priming” the tadpoles with a seizure led to them being 25 percent more resistant to a subsequent seizure four hours later was “puzzling,” said Aizenman, who is affiliated with the Brown Institute for Brain Science. It took about a dozen more experiments before his team, led by graduate student Mark Bell, could solve the mystery.

First they hindered polyamine synthesis altogether and found that not only did the protection against seizures disappear, but it also left the tadpoles even more vulnerable to seizures. Then they interrupted the conversion of putrescine into other polyamines and found that this step enhanced the protection, indicating that putrescine was the beneficial member of the family.

Going with those results, they administered putrescine directly to the tadpoles and found that it took 65 percent longer to induce a seizure than in tadpoles that didn’t get a dose of putrescine.

Further experiments showed that the protective effect occurs after putrescine is metabolized, with at least one intermediary step, into GABA, and GABA receptors are activated in brain cells.

“Potentially by manipulating this pathway we may be able to harness an ongoing protective effect against seizures,” Aizenman said. “However I should caution that this is basic research and it is premature to predict how well this would translate into the clinic.”

In the meantime, the research may also help explain a bit more about young brains in general, Aizenman said.

“Our findings may also tell us how normal brains, especially developing brains, may regulate their overall levels of activity and maybe keep a type of regulatory check on brain activity levels,” he said.

In addition to Aizenman and Bell, the paper’s other authors are undergraduates James Belarde and Hannah Johnson. The American Heart Association and the National Institutes of Health funded the study, while individual researchers were supported by the National Science Foundation, the Klingenstein Fund, and the Brain Science Siravo Awards for Epilepsy Research.