New study supports the role of a brain region called the amygdala in processing anxiety.
Credit and Larger Version 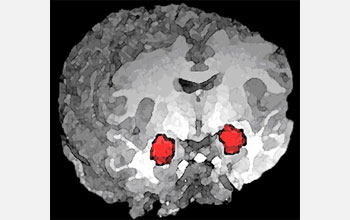 A research team led by Karl Deisseroth, associate professor of psychiatry and behavioral sciences and bioengineering, identified two key pathways in the brain: one which promotes anxiety, and one which alleviates anxiety.

The pathways are in a brain region called the amygdala. Prior research suggests the amygdala plays a role in anxiety, but earlier studies used widespread modifications of the amygdala, through drugs or physical disruption of the brain region, to study the way in which it affects anxiety. This new work, published in this week’s Nature, uses a tool called optogenetics–developed by Deisseroth and recently named Method of the Year by Nature Methods–to specifically tease out which pathways contribute to anxiety.

Optogenetics combines genetics and optical science to selectively manipulate the way a neuron fires in the brain. Neurons are electrically excitable cells that convey information through electrical and chemical signaling.

Directed genetic manipulations cause specific neurons to assemble a light-activated protein normally found in algae and bacteria. When triggered by certain wavelengths of light, these proteins allow researchers to increase or decrease neuronal activity in the brain and observe the effects on rodent models in an experiment.

Using optogenetic manipulation of various amygdala pathways, Deisseroth and colleagues examined how mouse behavior was affected. Since mice display anxiety-related behaviors in open spaces, they measured changes in anxiety by analyzing how much time mice spent exploring the center of an open field, or exploring the length of a platform without walls.

While optogenetics has been used to study amygdala function in behaviorally-conditioned fear, this is the first time it has been used to study anxiety. “Fear and anxiety are different,” Deisseroth explained. “Fear is a response to an immediate threat, but anxiety is a heightened state of apprehension with no immediate threat. They share the same outputs, for example physical manifestations such as increased heart rate, but their controls are very different.”

Anxiety disorders are the most prevalent among all psychiatric diseases, and include diseases such as post-traumatic stress disorder, obsessive-compulsive disorder and phobias. Anxiety also contributes to other major psychiatric disorders such as depression and substance abuse.

“Now that we know that these cell projections [in the amygdala] exist, we can first use this knowledge to understand anxiety more than we do now,” Deisseroth noted.

Deisseroth has previously used optogenetics to study deep brain stimulation in Parkinson’s disease. This research was detailed last year in the journal Science and reported online by the National Science Foundation (NSF).

Groundwork for the optogenetics technique was funded by NSF. This research was supported by the National Alliance for Research on Schizophrenia and Depression, the National Institutes of Health and NSF.