Teen sleep study adds to evidence of a ‘neural fingerprint’ 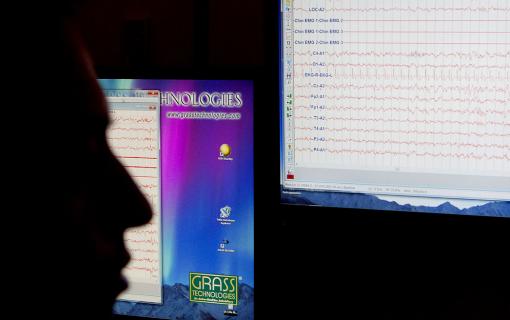 PROVIDENCE, R.I. [Brown University] — Teens are rarely described as stable, so when something about their rapidly changing brains remains placidly unaltered, neuroscientists take notice. Such is the case in a new study of electroencephalography (EEG) readings gathered from dozens of teens while they slept. Despite the major neural overhaul underway during adolescence, most individuals maintained a unique and consistent pattern of underlying brain oscillations. The work lends a new level of support to the idea, already observed in adults, that people produce a kind of brainwave “fingerprint.”

The research appears in the April 27 edition of the Journal of Neuroscience.

“Is there some inherent quality of the brainwave signal that is a core quality that is sustained, even in the face of these large developmental changes?” asked co-author Mary Carskadon, professor of psychiatry at the Warren Alpert Medical School of Brown University and director of the Sleep Research Laboratory at E.P. Bradley Hospital. “There is. Maybe not for every child, but for more children than not.”

Sleep researcher Mary Carskadon
“Showing that there are these fingerprints may open up future possibilities in using this kind of analysis in larger samples to look for endophenotypes that might be predictive of someone, say, who might go on to develop schizophrenia or depression.” Credit: Mike Cohea/Brown UniversitySleep and similarity

By design, the study took years of work. Carskadon recruited 19 volunteers who were 9 or 10 years old and 26 who were 15 or 16 years old to sleep for two consecutive nights in the lab while EEG electrodes recorded oscillations in their brains during both REM and non-REM sleep. For each child she repeated the measurements about two years later.

Carskadon sent the data to collaborators Leila Tarokh and Peter Achermann at the University of Zurich. They fed mathematical descriptions of the EEG waves into a computer armed with an algorithm to group waves of similar shapes and frequencies together. The computers had no information about which waves came from which night from which teen, but the algorithm ended up matching all four nights of sleep for most of the kids, a striking sign of their consistent but unique nature.

“I was pretty astounded about how well the algorithm was able to sort these individuals’ patterns together,” said Tarokh, the paper’s lead author, who is also adjunct instructor in psychiatry and human behavior at Brown.

But what does it mean?

Previous studies of EEG patterns in adult twins had found that identical ones had more similar patterns than non-identical ones, Tarokh said, suggesting that the EEG fingerprint has a genetic basis.

“At the moment it’s too soon to tell anything about individual sleep or behavior from this, but it could provide a tool to geneticists,” she said. “It is a link between behavior and genes.”

With further research, the functional or physiological significance of the patterns could become clearer, Carskadon said. One question would be whether particular influences such as sleep deprivation or alcohol use affect the pattern.

“Knowing this gives us another tool to examine brain function and stability,” Carskadon said. “Showing that there are these fingerprints may open up future possibilities in using this kind of analysis in larger samples to look for endophenotypes that might be predictive of someone, say, who might go on to develop schizophrenia or depression.”

For now, however, what’s better established is that the individual brainwave patterns people exhibit are strong enough to remain unperturbed by the tumult of adolescence.

The research was funded by the U.S. National Institute on Alcohol Abuse and Alcoholism and the Swiss National Science Foundation.