Credit: Hart Lab/Brown University
An unexpected observation in the C. elegans nematode may help explain the neurobiology of sleep in a wide variety of creatures, including humans. 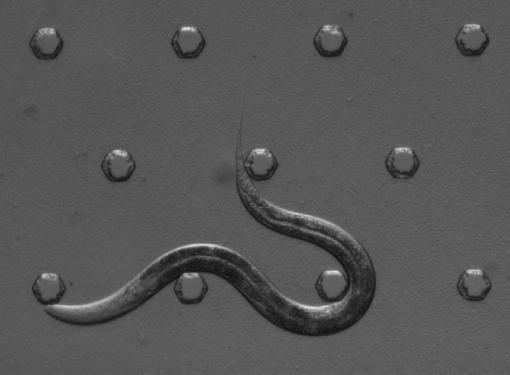 PROVIDENCE, R.I. [Brown University] — Sleeping worms have much to teach people, a notion famously applied by the children’s show “Sesame Street,” in which Oscar the Grouch often reads bedtime stories to his pet worm Slimy. Based on research with their own worms, a team of neurobiologists at Brown University and several other institutions has now found that “Notch,” a fundamental signaling pathway found in all animals, is directly involved in sleep in the nematode C. elegans.

“This pathway is a major player in development across all animal species,” said Anne Hart, associate professor of neuroscience at Brown. “The fact that this highly conserved pathway regulates how much these little animals sleep strongly suggests that it’s going to play a critical role in other animals, including humans. The genes in this pathway are expressed in the human brain.”

The work, published online by the journal Current Biology, offers new insights into what controls sleep. The lead authors are Komudi Singh, a postdoctoral fellow in the Department of Neuroscience at Brown University, and Michael Chao, a previous member of the Hart laboratory, who is now an associate professor at California State University–San Bernardino.

Ultimately, Hart added, researchers could use that knowledge to develop more precise and safer sleep aids.

“We only have some really blunt tools that we can use to change sleep patterns,” she said. “But there are definite side effects to manipulating sleep the way we do now.”

Hart first realized that Notch pathway genes might be important for sleep when her group was investigating an entirely different behavior. She was studying the effect of this pathway on the nematodes’ revulsion to an odious-smelling substance called octanol. What she found, and also reports in the Current Biology paper, is that adult nematodes without Notch pathway genes (like osm-11) have their Notch receptors turned off and, therefore, they do not avoid octanol as normal worms do.

But she was shocked to find that the adult nematodes in which the osm-11 gene was overexpressed were doing something quite bizarre. “Normally, adult nematodes spend all of their time moving” she said. “But, these animals suddenly start taking spontaneous ‘naps.’ It was the oddest thing I’d seen in my career.”

Nematode sleep is not exactly the same as sleep in larger animals, but these worms do go into a quiescent sleep-like state when molting. The worms with too much osm-11 were dozing when they were not supposed to.

Other experiments showed that worms lacking osm-11 and the related osm-7 genes were hyperactive, exhibiting twice as many body bends each minute as normal nematodes.

The story became clear. The more Notch signaling was turned on, the sleepier the worms would be. When it is suppressed, they go into overdrive and become too active.

In humans, the gene that is most similar to osm-11 is called Deltalike1 (abbreviated DLK1). It is expressed in regions of the brain associated with the sleep-wake cycle.

That result alone is not enough to lead directly to the development of a new sleep drug, even for worms. Notch signaling is implicated in a lot of different activities in the body, Hart said, some of which should not be encouraged.

“Too much Notch signaling can cause cancer, so we would have to be very targeted in how we manipulate it,” she said. “One of the next steps we’re going to take is to look at the specific steps in Notch signaling that are pertinent to arousal and quiescence.”

Focusing on those steps could minimize side effects, Hart said.

In addition to Hart, Singh, and Chao, other authors from Brown were Mark Corkins, Melissa Walsh, and Emma Beaumont, an intern from University of Bath. Authors who worked at Massachusetts General Hospital were Gerard Somers, Hidetoshi Komatsu, Jonah Larkins-Ford, Tim Tucey, and Heather Dionne. Author Douglas Hart is from the Massachusetts Institute of Technology and author Shawn Lockery is from the University of Oregon.

The National Institutes of Health and Massachusetts General Hospital funded the research.