Two-dimensional brain Researchers at Brown University have created a computer program to advance analysis of the neural connections in the human brain. The program’s special features include a linked view for users to view both the 3-D image (top) and 2-D closeups of the neural bundles. Credit: Radu Jianu/Brown University
The 2-D neural maps combine visual clarity with a Web-based digital map interface, and users can view 2-D maps together with 3-D images. The program aims to better understand myelinated axons, which have been linked to pathologies such as autism. Results are published in IEEE Transactions on Visualization and Computer Graphics. 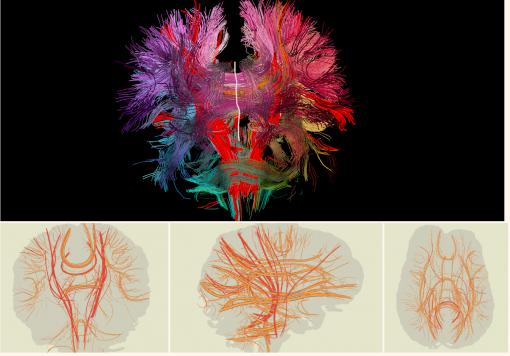 PROVIDENCE, R.I. [Brown University] — Medical imaging systems allow neurologists to summon 3-D color renditions of the brain at a moment’s notice, yielding valuable insights. But sometimes there can be too much detail; important elements can go unnoticed.

The bundles of individual nerves that transmit information from one part of the brain to the other, like fiber-optic cables, are so intricate and so interwoven that they can be difficult to trace through standard imaging techniques. To help, computer science researchers at Brown University have produced 2-D maps of the neural circuitry in the human brain.

The goal is simplicity. The planar maps extract the neural bundles from the imaging data and present them in 2-D – a format familiar to medical professionals working with brain models. The Brown researchers also provide a web interface by integrating the neural maps into a geographical digital maps framework that professionals can use seamlessly to explore the data.

“In short, we have developed a new way to make 2-D diagrams that illustrate 3-D connectivity in human brains,” said David Laidlaw, professor of computer science at Brown and corresponding author on the paper published in IEEE Transactions on Visualization and Computer Graphics. “You can see everything here that you can’t really see with the bigger (3-D) images.”

Making 2-D diagrams of 3-D complexities
David Laidlaw, left, and Radu Jianu worked with colleague Çağatay Demiralp to develop software tools that allow neuroscientists to examine 2-D and 3-D maps and images of the brain — and to share their work across the Web.  Credit: Mike Cohea/Brown UniversityThe 2-D neural maps are simplified representations of neural pathways in the brain. These representations are created using a medical imaging protocol that measures the water diffusion within and around nerves of the brain. The sheathing is composed of myelin, a fatty membrane that wraps around axons, the threadlike extensions of neurons that make up nerve fibers.

Medical investigators can use the 2-D neural maps to pinpoint spots where the myelin may be compromised, which could affect the vitality of the neural circuits. That can help identify pathologies, such as autism, that brain scientists increasingly believe manifest themselves in myelinated axons. Diseases associated with the loss of myelin affect more than 2 million people worldwide, according to the Myelin Project, an  organization dedicated to advancing myelin-related research.

Researchers can use the 2-D neural maps to help identify whether the structure or the size of neural bundles differs among individuals and how any differences may relate to performance, skills or other traits. “It’s an anatomical measure,” Laidlaw said. “It’s a tool that we hope will help the field.”

While zeroing in on the brain’s wiring, the team, including graduate students Radu Jianu and Çağatay Demiralp, added a “linked view” so users can toggle back and forth between the neural bundles in the 2-D image and the larger 3-D picture of the brain.

“What you see is what you operate,” said Jianu, the paper’s lead author. “There’s no change in perspective with what you’re working with on the screen.”

Users can export the 2-D brain representations as images and display them in Web browsers using Google Maps. “The advantage of using this mode of distribution is that users don’t have to download a large dataset, put it in the right format, and then use a complicated software to try and look at it, but can simply load a webpage,” Jianu explained.

The program is designed to share research. Scientists can use the Web to review brain research in other labs that may be useful to their own work.