Even though many Americans learn through community health screenings that they are at high risk for having a stroke, they rarely follow-up with their doctor for care. 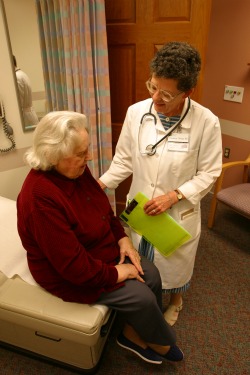 But a new University of Michigan study shows high-risk stroke patients are twice as likely to get follow-up care from a primary care doctor if they receive a pep talk over the telephone.

“It is unfortunate that these high-risk patients often have a lower rate of follow-up with their primary care physicians,” says Rajesh Balkrishnan, Ph.D., associate professor in the College of Pharmacy and School of Public Health at the U-M. “They should not ignore their results and seek medical help.”

Stroke is one of the leading causes of death and disability in the United States. But controlling high blood pressure and high cholesterol helps reduce the chance of fatty deposits building up in the arteries that can lead to a stroke.

The U-M study, published in the July-August issue of the Journal of Stroke and Cerebrovascular Diseases, tested the effectiveness of telephone interventions with those who had two or more stroke risk factors.

More than 200 people participated in the study. All participants lived in North Carolina, a state in the ‘stroke belt,’ the southeastern region of the country with the nation’s highest incidence of stroke.

They received either standard information on strokes, such as risk factors, or a telephone call — a brief intervention known as the Health Belief Model which offers specific health advice and discusses barriers to seeing a primary care physician.

“Patients who had the telephone intervention were twice as likely to visit their primary care physician and discuss stroke screening results,” says Balkrishnan. “Telephone interviewers worked with these patients and reinforced the need for stroke care with a primary care doctor,” he says.

These patients also modified their diet and even talked about seeing stroke specialists, he adds.

Three months after the screening, 56 percent in the intervention group, compared to 38 percent who did not get a call, had visited their primary care doctor specifically to discuss the stroke screening results.

Stroke is the third leading cause of death in the United States. Nearly 800,000 Americans have a stroke each year, and 137,000 die of stroke. Strokes are more common among older people, but there’s evidence of stroke declining in recent decades as more people control high cholesterol and high blood pressure and fewer people smoke.