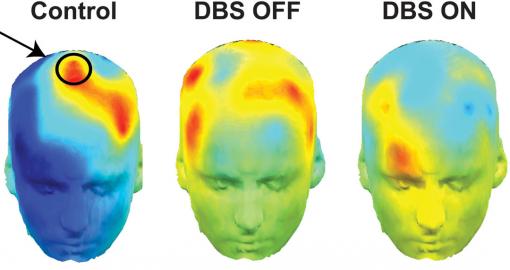 PROVIDENCE, R.I. [Brown University] — Take your time. Hold your horses. Sleep on it.

When people must decide between arguably equal choices, they need time to deliberate. In the case of people undergoing deep brain stimulation (DBS) for Parkinson’s disease, that process sometimes doesn’t kick in, leading to impulsive behavior. New research into why that happens has led scientists to a detailed explanation of how the brain devotes time to reflect on tough choices.

Michael Frank, professor of cognitive, linguistic, and psychological sciences at Brown University, studied the impulsive behavior of Parkinson’s patients when he was at the University of Arizona several years ago. His goal was to model the brain’s decision-making mechanics. He had begun working with Parkinson’s patients because DBS, a treatment that suppresses their tremor symptoms, delivers pulses of electrical current to the subthalamic nucleus (STN), a part of the brain that Frank hypothesized had an important role in decisions. Could the STN be what slams the brakes on impulses, giving the medial prefrontal cortex (mPFC) time to think?

Michael Frank
When the medial prefrontal cortex needs time to deliberate, it recruits help in warding off impulsive urges from elsewhere in the brain.“We didn’t have any direct evidence of that,” said Frank, who is affiliated with the Brown Institute for Brain Science. “To test that theory for how areas of the brain interact to prevent you from making impulsive decisions and how that could be changed by DBS, you have to do experiments where you record brain activity in both parts of the network that we think are involved. Then you also have to manipulate the system to see how the relationship between recorded activity in one area and decision making changes as a function of stimulating the other area.”

Frank and his team at Brown and Arizona did exactly that. They describe their findings in a study published online in the journal Nature Neuroscience.

The researchers’ measurements from two experiments and analysis with a computer model support the theory that when the mPFC is faced with a tough decision, it recruits the STN to ward off more impulsive urges coming from the striatum, a third part of the brain. That allows it time to make its decision.

For their first experiment, the researchers designed a computerized decision-making experiment. They asked 65 healthy subjects and 14 subjects with Parkinson’s disease to choose between pairs of generic line art images while their mPFC brain activity was recorded. Each image was each associated with a level of reward. Over time the subjects learned which ones carried a greater reward.

Sometimes, however, the subjects would be confronted with images of almost equal reward — a relatively tough choice. That’s when scalp electrodes detected elevated activity in the mPFC in certain low frequency bands. Lead author and postdoctoral scholar James Cavanagh found that when mPFC activity was larger, healthy participants and Parkinson’s participants whose stimulators were off would take proportionally longer to decide. But when deep brain stimulators were turned on to alter STN function, the relationship between mPFC activity and decision making was reversed, leading to decision making that was quicker and less accurate.

The Parkinson’s patients whose stimulators were on still showed the same elevated level of activity in the mPFC. The cortex wanted to deliberate, Cavanagh said, but the link to the brakes had been cut.

“Parkinson’s patients on DBS had the same signals,” he said. “It just didn’t relate to behavior. We had knocked out the network.”

In the second experiment, the researchers presented eight patients with the same decision-making game while they were on the operating table in Arizona receiving their DBS implant. The researchers used the electrode to record activity directly in the STN and found a pattern of brain activity closely associated with the patterns they observed in the mPFC.

“The STN has greater activity with greater [decision] conflict,” he said. “It is responsive to the circumstances that the signals on top of the scalp are responsive to, and in highly similar frequency bands and time ranges.”

A mathematical model for analyzing the measurements of accuracy and response time confirmed that the elevated neural activity and the extra time people took to decide was indeed evidence of effortful deliberation.

“It was not that they were waiting without doing anything,” said graduate student Thomas Wiecki, the paper’s second author. “They were slower because they were taking the time to make a more informed decision. They were processing it more thoroughly.”

The results have led the researchers to think that perhaps the different brain regions communicate by virtue of these low-frequency signals. Maybe the impulsivity side effect of DBS could be mitigated if those bands could remain unhindered by the stimulator’s signal. Alternatively, Wiecki said, a more sophisticated DBS system could sense that decision conflict is underway in the mPFC and either temporarily suspend its operation until the decision is made, or stimulate the STN in a more dynamic way to better mimic intact STN function.

These are not trivial ideas to foist upon DBS engineers, but by understanding the mechanics underlying the side effect — and in healthy unhindered decision making — the researchers say they now have a target to consider.

In addition to Frank, Cavanagh, and Wiecki, another Brown author is Christina Figueroa. Arizona authors include Michael Cohen, Johan Samanta, and Scott Sherman.

Editors: Brown University has a fiber link television studio available for domestic and international live and taped interviews, and maintains an ISDN line for radio interviews. For more information, call (401) 863-2476.
Share on:
or:
Our Newsletter Subscribe!