Nerve cells and blood vessels have striking common features during their development. Scientists from the German Cancer Research Center (DKFZ) have shown that macrophages control the growth and branching of nerves as well as blood vessels in the brain. A molecule called CD95 plays a key role in this process. 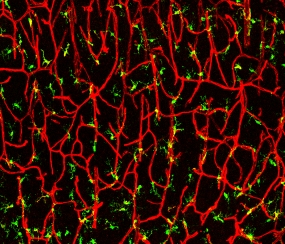 During the early postnatal development of the brain, macrophages (green) are located in the immediate vicinity of blood vessels. © DKFZ

Si Chen from the research team led by Ana Martin-Villalba at the German Cancer Research Center (Deutsches Krebsforschungszentrum, DKFZ) in Heidelberg has now shown that these immune cells play an important role in brain development. “In our present work we have shown that the immune system interacts with the vascular and nervous systems during CNS development,” the scientist said. The CNS macrophages form a signaling molecule, CD95L, which they use to control the common growth of neurons and vessels.

CD95L is the binding partner for the CD95 receptor. This receptor was first discovered on lymphocytes, where it triggers programmed cell death (apoptosis) once it has attached to its binding partner CD95L. Martin-Villalba’s research group has discovered numerous other functions of CD95 over the past few years. The researchers found the receptor on various cell types including neurons, immune cells, and tumor cells. “CD95 also plays a role, for example, in the spread of some tumors and in inflammations,” explained Martin-Villalba.

Their new results now show that various cell types in the developing brain are forming CD95 – in increasing quantities as development progresses. By contrast, CD95L is formed primarily by macrophages. “We have identified CNS macrophages as the main source of CD95L,” said Martin-Villalba. She added: “The branched cell shape of the macrophages brings them in close contact with blood vessels and neuronal extensions. Therefore, cell-cell interactions probably play a key role – CD95L on the cell surface of macrophages binds to the CD95 receptors on nerves and vessels. Thus, the CNS macrophages control the coordinated development of both systems (nerves and blood vessels) via the same molecule, namely CD95, in a common and simultaneous process.”

Macrophage-derived CD95L activates its matching receptor, CD95, on blood vessels, which then grow and branch. In the same way, it activates the CD95 receptor on neurons. The neurons branch in the developing cortex and retina of the eye.

In further experiments, the research team showed the consequences of insufficient quantities of CD95 receptors or CD95 ligands, respectively. This leads to reduced growth of vessels and neurons, less branching and lower synaptic activity of neurons. “There is evidence that the absence of CD95 can result in behavioral changes,” said Martin-Villalba. “Mice that produce low levels of CD95 exhibit a number of behavioral and cognitive deficits such as increased anxiety and deficient spontaneous activity. Our research results underpin the relevance of macrophages for the creation of the neurovascular network during brain development.”

Many macrophages also invade tumors. “Macrophages might also use CD95L to stimulate the growth of tumor cells and blood vessels together,” Martin-Villalba speculated. “It may be possible to use a specific antibody to block this signaling molecule – and thus to prevent further growth of the tumor and the vessels,” envisioned the scientist, adding that first clinical experiments with a blockade of CD95 activity as a secondary therapy in patients with brain cancer (glioblastoma) showed very promising outcomes.