Memory for stimulus sequences distinguishes humans from other animals

Humans possess many cognitive abilities not seen in other animals, such as a full-blown language capacity as well as reasoning and planning abilities. Despite these differences, however, it has been difficult to identify specific mental capacities that distinguish humans from other animals. Researchers at Stockholm University and the City University of New York (CUNY) have now discovered that humans have a much better memory to recognize and remember sequential information. 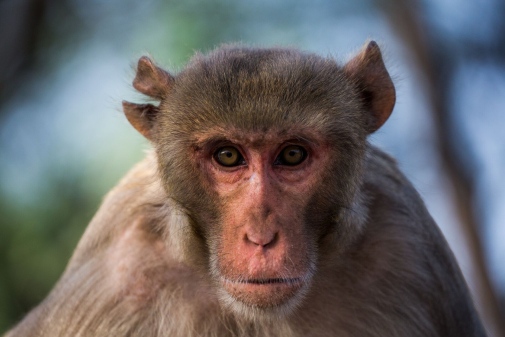 Macaques, and other animals, have great difficulties in distinguishing between sequences of stimuli. This might be what separates humans from other animals. Photo: Johan Lind/N

“The data we present in our study indicate that humans have evolved a superior capacity to deal with sequential information. We suggest that this can be an important piece of the puzzle to understand differences between humans and other animals,” says Magnus Enquist, head of the Centre for the Study of Cultural Evolution at Stockholm University.

The new study collated data from 108 experiments on birds and mammals, showing that the surveyed species had great difficulties in distinguishing between certain sequences of stimuli.

“In some experiments, animals had to remember the order in which a green and a red lamp were lit. Even this simple discrimination turned out to be very difficult, and the difficulties increase with longer sequences. In contrast, animals perform as well as humans in most cases in which they have to distinguish between single stimuli, rather than sequences,” says Johan Lind, a co-author of the study and an Associate Professor at Stockholm University.

Recognizing sequences of stimuli is a prerequisite for many uniquely human traits, for instance language, mathematics, or strategic games such as chess. After establishing that non-human animals have trouble distinguishing stimulus sequences, the researchers proposed a theory for why it is so.

“We found that the limited capacities of non-human animals can be explained by a simpler kind of memory that does not faithfully represent sequential information. Using a mathematical model, we show that this simpler memory explains the results from animal experiments,” says Stefano Ghirlanda, lead author of the study and Professor of psychology at Brooklyn College and the CUNY Graduate Center.

This research can explain why no language-trained animal has successfully mastered sequential aspects of language, such as the difference between “the dog bit the lady” and “the lady bit the dog”. The researchers’ hypothesize that, some time during human prehistory, the capacity to recognize and remember sequences of stimuli evolved, supporting the later evolution of human-level language, planning, and reasoning.

The article Memory for stimulus sequences: a divide between humans and other animals? is published on Royal Society Open Science.