Learning and memory : the role of neo-neurons revealed

By using selective stimulation the researchers were able to show that these neo-neurons increase the ability to learn and memorize difficult cognitive tasks. This newly discovered characteristic of neo-neurons to assimilate complex information could open up new avenues in the treatment of some neurodegenerative diseases. This publication is available online on the Nature Neuroscience journal’s website.

The discovery that new neurons could be formed in the adult brain created quite a stir in 2003 by debunking the age-old belief that a person is born with a set number of neurons and that any loss of neurons is irreversible. This discovery was all the more incredible considering that the function of these new neurons remained undetermined. That is, until today.

Using mice models the team working under Pierre-Marie Lledo, head of the Laboratory for Perception and Memory (Institut Pasteur/CNRS) recently revealed the role of these neo-neurons formed in the adult brain with respect to learning and memory. With the help of an experimental approach using optogenetics*, developed by this very same team and published in December 2010, the researchers were able to show that when stimulated by a brief flash of light these neo-neurons facilitate both learning and the memorization of complex tasks. This resulted in mice models that were able to memorize information given during the learning activity more quickly and remember exercises even 50 days after experimentation had ended. The study also shows that neo-neurons generated just after birth hold no added advantages as relates to either learning or memory. In this respect it is only the neurons produced by the adult brain that have any considerable significance.

“This study shows that the activity of just a few neurons produced in the adult brain can still have considerable effects on cognitive processes and behavior. Moreover, this work helps to illustrate how the brain assimilates new stimulations seeing as normally electrical activity (which we mimic using flashes of light) is produced within the brain’s attention centers”, explains the study’s director Pierre-Marie Lledo.

Beyond simply discovering the functional contribution of these neo-neurons, the study has also reaffirmed the clear link between “mood” (defined here by a specific pattern of stimulation) and cerebral activity. It has been shown that curiosity, attentiveness and pleasure all promote the formation of neo-neurons and consequently the acquisition of new cognitive abilities. Conversely, a state of depression is detrimental to the production of new neurons and triggers a vicious cycle which prolongs this state of despondency. These results, and the optogenetics technologies that enabled this study, may prove very useful for devising therapeutic protocols which aim to counter the development of neurologic or psychiatric diseases. 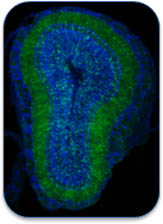 Section of a mouse brain observed using a fluorescence microscope. The green filaments represent neo-neurons in an organized network.