PITTSBURGH-Autism is a disorder well known for its complex changes in behavior – including repeating actions over and over and having difficulty with social interactions and language. Current approaches to understanding what causes these atypical behaviors focus primarily on specific brain regions associated with these specific behaviors without necessarily linking back to fundamental properties of the brain’s signaling abilities. 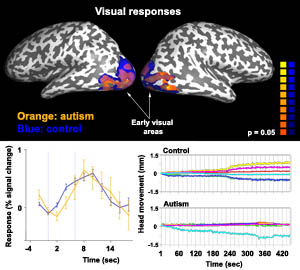 New research led by Carnegie Mellon University neuroscientists takes the first step toward deciphering the connection between general brain function and the emergent behavioral patterns in autism. Published in the journal Neuron, the study shows that autistic adults have unreliable neural sensory responses to visual, auditory and somatosensory, or touch, stimuli. This poor response reliability appears to be a fundamental neural characteristic of autism.

“Within the autism research community, most researchers are looking for the location in the brain where autism happens,” said Ilan Dinstein, a postdoctoral researcher in Carnegie Mellon’s Department of Psychology and lead author of the study. “We’re taking a different approach and thinking about how a general characteristic of the brain could be different in autism – and how that might lead to behavioral changes.”

For the study, 14 adults with autism and 14 without – all between the ages of 19 and 39 – completed sensory experiments while inside a functional magnetic resonance imaging (fMRI) machine located at CMU’s Scientific Imaging and Brain Research center. To test the visual system’s neural response, participants were shown a pattern of moving dots. The auditory stimulation consisted of pure tones presented to both ears, and short air puffs were used to stimulate the somatosensory senses. The fMRI measured each individual’s brain activity during the experiments.

In all of the primary cortices, visual, auditory and somatosensory, the within-individual response reliability was significantly lower – by 30-40 percent – in autism; meaning, there was not a typical, predictable response from trial to trial. Thus, in the individuals with autism, there was significant intra-individual variability, with responses varying from strong to weak. Non-autistic adults had replicable and consistent responses from trial to trial.

“This suggests that there is something very fundamental that is altered in the cortical responses in individual’s with autism,” said Marlene Behrmann, professor of psychology at CMU and a leading expert on using brain imaging to understand autism. “It also begins to build a bridge between the kind of genetic changes that might have given rise to autism in the first place – and the kind of changes in the brain that are responsible for autistic behavioral patterns.

“And, what I think is so powerful is that we sampled visual, auditory and somatosensory senses. We were unbelievably thorough and attacked every sensory modality and showed the same pattern of unreliability across all three senses.”

The study also presents the first time that researchers have investigated multiple sensory systems – at a primary brain function level – within the same autistic individual.

“One of the problems with autism is that there is considerable variability in symptoms across individuals,” Dinstein said. “In this case, we have a tremendous amount of data on each individual and each of their three sensory systems. And, we see the same unreliability across all of them in autism relative to the controls.”

While this study focused on adults, the team plans on taking the research further to study how the details of sensory unreliability play out in younger autistic groups.

“We are not suggesting that unreliable sensory – visual, auditory, touch – responses cause autism,” said David Heeger, professor of psychology and neural science at New York University. “But rather that autism might be a consequence of unreliable activity throughout the brain during development. We’ve measured it in sensory areas of the brain but we hypothesize that the same kind of unreliability might be what’s limiting the development of social and language abilities in the brain areas that subserve those functions.”

In addition to expanding autism research to determine when and how basic neural processing affects autism, the research may have clinical implications.

“The poor cortical response reliability observed in the individuals with autism in this study may represent a biomarker, which could contribute to better define Autism Spectrum Disorder (ASD) subtypes,” said Pauline Chaste, a visiting research scholar at the University of Pittsburgh Medical Center who was not affiliated with the research but studies how genetic mutations affect psychiatric disorders. “This is very important because of the great heterogeneity of phenotype in ASD which makes the definition of subphenotypes critical for genetic studies as well as for treatment studies. Thus, the use of this biomarker may help to define new targets for treatment but also to assess efficacy. Moreover this study brings new insight into understanding atypical sensory sensitivity in autism, which is a major concern for a vast majority of patients and remains sorely underexplored.”

Lauren Lorenzi, a research associate at Carnegie Mellon, Nancy Minshew from the Department of Neurology at the University of Pittsburgh and Rafael Malach, the Morris and Barbara Levinson Professor of Brain Research at the Weizmann Institute of Science, were also part of the research team.

This study will appear as the cover story of the October 2012 print issue of Neuron. The issue’s cover design was created by Carnegie Mellon’s Communication Design team.

For more information, watch Dinstein and Behrmann discuss this study at http://youtu.be/0eSdOjMaGO8.

Figure 1: The top panel shows a map of the brain responses to the visual stimulation; they are similar across autism and control groups. The bottom left panel shows visual system responses of two individuals – one with autism and one control. The average responses – across trials – are similar in terms of amplitude and shape, yet the trial-by-trial variability is much larger in the individual with autism (error bars are much larger). The bottom right panel shows that this is not a consequence of different head motion between the two individuals as both moved their head to a similar degree. View a high-res version of this image.

Figure 2: Across participants, the signal-to-noise ratio within the brain was weaker in the autism group. Signal-to-noise is a ratio of the average signal strength in comparison to the trial-by-trial variability. View a high-res version of this image.

View the cover and the issue’s contents at http://www.cell.com/neuron/issue?pii=S0896-6273%2812%29X0019-9. The cover was produced by Carnegie Mellon’s Communications Design and Photography Group.