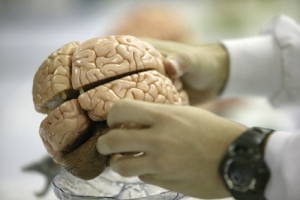 The unique 15 year study with researchers at the University of Tennessee and Harvard Medical School also identified several genetic loci that control the size of different brain parts.

The aim of the research was to find out if different parts of the brain can respond independently of each other to evolutionary stimulus (mosaic evolution) or whether the brain responds as a whole (concerted evolution). Unlike previous studies the researchers compared the brain measurements within just one species. The findings have been published in the journal Nature Communications.

The brains of approximately 10,000 mice were analysed. Seven individual parts of each brain were measured by volume and weight. The entire genome, except the Y chromosome, was scanned for each animal and the gene set for each brain part identified.

Dr Hager says: “If all the different brain parts evolved as a whole we would expect that the same set of genes influences size in all parts. However, we found many gene variations for each different part of the brain supporting a mosaic scenario of brain evolution. We also found very little correlation between the size of the brain parts and the overall size of the brain. This again supports the mosaic evolutionary hypothesis.”

The evidence means that overall brain size can evolve independently of body size.

Dr Hager says: “If we can identify the specific genes that cause variations in the size of brain parts then there will be big implications for researchers looking at neuronal disease and brain development. We hope this research will significantly advance our understanding of the brain.”

The study is a collaboration between The University of Manchester, Professors Robert Williams and Lu Lu at The University of Tennessee Health Science Center and Professor Glenn Rosen at the Beth Israel Deaconess Medical Centre at Harvard Medical School.

Images can be obtained from the press office.