A direct line through the brain to avoid rotten food

Consuming putrid food can be lethal as it allows bacterial pathogens to enter the digestive system. To detect signs of decay and thus allowing us and other animals to avoid such food poisoning is one of the main tasks of the sense of smell. Behavioural scientists and neurobiologists at the Max Planck Institute for Chemical Ecology in Jena, Germany, have now for the first time decoded the neural mechanisms underlying an escape reflex in fruit flies (Drosophila) activated in order to avoid eating and laying eggs in food infected by toxic microorganisms. A super-sensitive and completely dedicated neural line, from olfactory receptor, via sensory neuron and primary brain neurons, is activated as soon as the tiniest amount of geosmin is in the air. Geosmin is a substance released by bacteria and mold fungi toxic to the fly. This stimulus overrides all other food odour signals, irrespective of how attractive they are on their own. Consequently, geosmin is a full STOP signal that prevents flies from eating and laying eggs in toxic food, similar to when we open the fridge and smell last week’s forgotten dinner. 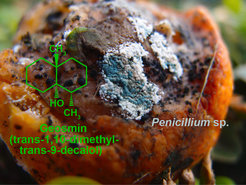 Zoom Image
Geosmin, the typical earthy smell released by mold fungi and other microbes. In the picture is its chemical structure −… [more]
© Cell Press / Elsevier / MPI for Chemical Ecology / Stensmyr

The shocking number of fatalities in Germany in spring 2011 linked to fenugreek sprouts contaminated with EHEC bacteria showed that it is crucial for every foraging organism to be able to distinguish between fresh food and that infested by pathogenic microbes. Food, whether meat or vegetables, is more or less always colonised by bacteria and other microbes, their numbers varying with differing degrees of freshness and storage conditions. Usually, the immune system can cope with microorganisms in the food. Consequently, if food decay is not too far advanced, animals can digest the food without harm. But what protects us and other animals when the concentration of toxin-producing and often pathogenic microbes has become dangerously high?

In many cases visual signs allow us to avoid putrid food – who wants to bite into a rotting orange anyway? A more direct and common signal, however, is perception of certain odours released by hazardous microbes and/or their activity. If these odours are detected, the food item is directly discarded, a behaviour which saves lives. But which neural functions underlie such an avoidance or even flight behaviour? What does the way from the odour molecule and the olfactory receptors into the brain and finally to the reaction of the animal look like?

The genetically very well characterized fruit or vinegar fly Drosophila melanogaster and related species are perfect study objects to answer such a question. The flies typically feed on yeasts growing on rotting fruit. This is the stage where they must distinguish between “good” and “bad” microbes, i.e. at which stage of decomposition the fruit is. In our experiments it was shown that flies consuming pathogenic bacteria or fungi died very fast, and eggs deposited did not result in viable larvae. The odour substance geosmin is known to be produced by several fungi and bacteria and may trigger deterrent reactions. Geosmin is responsible for a smell quite familiar to us: the strong scent of wet soils, especially after droughts. The human nose is highly sensitive to this odour and can detect it at concentrations as low as 0,1 ppb (parts per billion). Max Planck scientists now found that Drosophila antennae are even more sensitive to geosmin.

“We started with electrophysiological experiments and analysed all olfactory sensory neurons on the fly antenna successively – more than thousand measurements,” says Marcus Stensmyr, first author of the study. Already at this stage, the first unexpected result became obvious: Only a single neuron type labelled “ab4B” responded to geosmin. These neurons carry the specific receptor Or56a, which we could show reacts exclusively to geosmin. The specificity could be established both in single neuron recordings linked to gas chromatography, where more than 3000 odours were tested, and in experiments using cell cultures ectopically expressing the receptor.

Optical imaging of the Drosophila brain revealed another interesting result: From the approximately 50 glomeruli that constitute the antennal lobe, the olfactory centre of the flies, only one, labelled DA2, was activated by geosmin. DA2 was found in the same region as other glomeruli that are involved in odour-evoked aversive behaviour. Stimulation of DA2 resulted in activation of a single type of a specific projection neuron conveying the message regarding geosmin presence to higher brain areas. Projection neurons are otherwise often more broadly tuned, providing a cross-glomerulus pattern for olfactory coding. “However, this is different in the case of geosmin, Or56a, DA2 and the related projection neurons,” says Bill Hansson, leader of the study. In this circuit, the stimulus is directly patched through from antenna to behaviour, without any detours. Until now, such patterns have only been measured in the responses to sex pheromones, if that is at all comparable, report the scientists. For the first time, we see a fully dedicated neural line for an odour involved in feeding behaviour.

Behavioural assays using the recently established “Flywalk” system confirm the nerve and brain measurements in the laboratory. In the “Flywalk”, single fruit flies are placed into small glass tubes, different odours are applied, and the behaviour of the flies is recorded by a camera connected directly to a computer quantifying the behaviour.

The geosmin stimulus, mediated through the dedicated neural line, does not only cause the flies to stop or move away from the odour source, it also overrides all simultaneously offered highly attractive odours, such as vinegar or fruit scents, at minute concentrations. This means that flies are programmed to avoid geosmin even in a mixture of different smells and will thus not be tempted to consume pathogens accidentally. This is important, because odour mixtures are the rule and not an exception in a natural environment.

The response to geosmin is so strong that it also regulates oviposition behaviour in females: female Drosophila laid their fertilized eggs only on substrates overgrown with ordinary yeast; they strictly avoided culture media containing the highly pathogenic geosmin producing bacterium Streptomyces coelicolor. In a Streptomyces mutant deficient in its geosmin-producing enzyme, the flies did, however, oviposit, and the larvae consequently died. Geosmin is thus sufficient and necessary to elicit the avoidance behaviour.