ANN ARBOR, Mich. — Sixteen months ago, musician and composer Paul Skripnik lay on an operating table at the University of Michigan Health System, ready to have brain surgery. He knew his case was a tricky one. 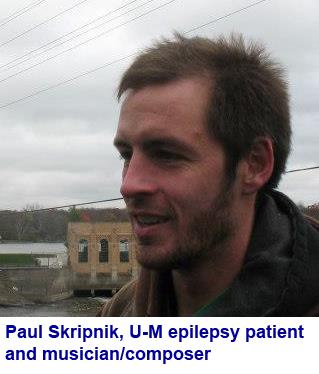 He had placed his trust in an epilepsy care team that would attempt to eliminate the source of the severe seizures that had plagued him every day for years. His epilepsy had kept him from attending music school and using his talents to the fullest – and even prevented him from driving.

This week, he’ll celebrate his new seizure-free life with a concert of music he has written since that operation.

Playing together with a dozen musician friends in a concert with the pun-filled title of “Seize the Day”, his performance on Saturday, Jan. 5 in Grand Rapids will raise money to help others with epilepsy.

“Living without seizures is a dream for all who experience epilepsy. Now it is a reality. My life was not only saved, but changed for the better.”

Getting to this point wasn’t guaranteed. The part of his brain that spawned his seizures was close to areas that controlled his ability to play piano and percussion, and other tasks requiring manual dexterity and higher brain function.

But with advanced brain monitoring, surgical planning and neurosurgery available at U-M, the operation spared those areas while eliminating the source of his seizures.

U-M neurosurgeon Oren Sagher, M.D., led the surgical team that performed two operations. In the first, they placed devices called grids on the surface of the two areas of Skripnik’s brain suspected of harboring the seizure focus. For a week, the devices collected detailed information about electrical activity in those two areas.

This second operation, called a resection, zeroed in precisely on Skripnik’s seizure ‘focus’, the area of brain tissue where electrical activity between brain cells started going haywire at the beginning of each seizure. This allowed Sagher to remove the smallest possible amount of brain tissue.

Each epilepsy patient’s seizure focus is different, and the U-M epilepsy team uses a number of tools to find it, explains U-M neurologist Simon Glynn, M.D.

Electrical activity monitoring, called EEG, as well as brain imaging techniques using MRI and PET scanners, all helped them find the general source of Skripnik’s seizures. The surgically implanted grids – available at few hospitals — finished the detective work and identified a spot in his left parietal lobe as the focus.

About 3,000 epilepsy patients a year turn to U-M for care, and the team has earned Level 4 referral center status from the National Association of Epilepsy Centers. Nearly 100 patients a year undergo epilepsy surgery at U-M.

When Skripnik came to U-M after years of treatment with medications, and an evaluation by Adriana Tanner, M.D. at St. Mary’s Health Care, he wasn’t sure he would be a candidate for surgery. Glynn and his colleagues carried out the full array of tests and imaging to see if he might.

“With Paul, we were able to develop a hypothesis of where to place the grids for intracranial monitoring, and using them we were able to define a safe area to resect,” says Glynn. “If we had not had such precise information, all of his composing and performing ability, even his language ability, would have been at risk from the resection of the seizure focus.”

Now, Skripnik is not just back to writing and playing music. Being seizure-free has changed everything, even allowing him to walk on a hard sidewalk instead of the grass beside it — because he no longer has to fear falling on the concrete when a seizure strikes.

He says, “Every day, Dr. Sagher, Dr. Glynn, and the whole team at U-M spends its time turning dreams into reality.  Living without seizures is a dream for all who experience epilepsy. Now it is a reality. My life was not only saved, but changed for the better. My thinking skills, memory, and faculty for music has improved steadily since the operation. I am overjoyed to be rid of that part of my brain.”

More about the “Seize the Day” concert:

On Jan. 5, most of the musical pieces he and his friends will perform at the “Seize the Day” concert are those he has written since his operation. Recordings of some of his music are also available on his YouTube channel at http://www.youtube.com/channel/UCejXHcIUFqbI6VCAnQouuww/feed?filter=2

The concert, which begins at 7 p.m. at the Royce Auditorium of the St. Cecilia Music Center, 24 Ransom Ave. NE, will raise money for the Epilepsy Foundation of Michigan. Tickets are $20.

The performance will feature works by Skripnik and Theodore Ndawillie II, performed by musicians from the Grand Rapids Symphony, U-M, Grand Valley State University, the Cleveland Institute of Music, Michigan State University and more. More details are available at http://seizethedaygr.eventbrite.com

The Epilepsy Foundation of Michigan, the only statewide non-profit organization focusing on epilepsy, provides a wide range of programs and services for people with epilepsy and their families, and for medical professionals involved in epilepsy care and community members. The foundation has offices in Southfield and Grand Rapids and offers information online at http://www.epilepsymichigan.org/ and by phone at (800) 377-6226.

More about epilepsy care and research at U-M:

Adult patients interested in learning more about epilepsy care through the Comprehensive Epilepsy Program at the U-M Health System should call 734-936-9020 or visit this page.

Volunteers are needed for a U-M clinical trial related to the genetic causes of epilepsy; for more information see http://umhealth.me/MHr7IT