ANN ARBOR, Mich. — A bizarre twist on the usual way proteins are made may explain mysterious symptoms in the grandparents of some children with mental disabilities. 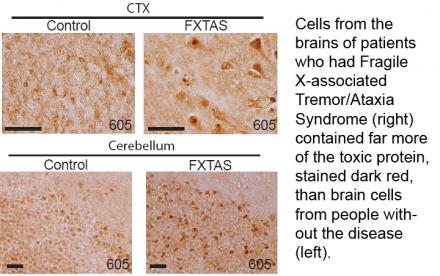 The discovery, made by a team of scientists at the University of Michigan Medical School, may lead to better treatments for older adults with a recently discovered genetic condition.

The condition, called Fragile X-associated Tremor Ataxia Syndrome (FXTAS), causes shakiness and balance problems and is often misdiagnosed as Parkinson’s disease. The grandchildren of people with the disease have a separate disorder called Fragile X syndrome, caused by problems in the same gene. The new discovery may also help shine light on that disease, though indirectly.

In a new paper published in the journal Neuron, the U-M-led team presents evidence that a toxic protein they’ve named FMRpolyG contributes to the death of nerve cells in FXTAS – and that this protein is made in a very unusual way.

Normally, DNA is transcribed into RNA, and then a part of the RNA is translated into a protein that performs its function in cells.  Where this translation process starts on the RNA is usually determined by a specific sequence called a start codon.

The gene mutation that causes FXTAS is a repeated DNA sequence that is made into RNA but normally is not made into protein because it lacks a start codon.  However, the investigators discovered that when this repeat expands, it can trigger protein production by a new mechanism known as RAN translation.

Corresponding author Peter Todd, M.D., Ph.D., notes that this unusual translation process appears to stem from a long chain of repeated DNA “letters” found in the genes of both grandparents and kids with Fragile X mutations. Todd is the Bucky and Patti Harris Professor in theU-M Department of Neurology.

The U-M group went on to show how this RAN translation occurs in FXTAS and demonstrated that blocking it prevents the repeat mutation from being toxic, suggesting a new target for future treatments.

Fragile X tremor/ataxia syndrome or FXTAS was only discovered a decade ago. It may affect as many as one in every 3,000 men and one in 20,000 women, who have a repeat mutation in the gene known as FMR1.  However, these patients don’t usually develop symptoms until late middle age, allowing them to pass the mutation on to their daughters, who can then have children where the DNA repeat that has grown much longer. In those children, especially in boys, it can cause severe intellectual disability and autism-like symptoms as the FMR1 gene shuts down and none of the normal protein is produced.

In fact, says Todd, it’s often only after a child is diagnosed with Fragile X syndrome through genetic testing that their grandfather or grandmother finds out that their own symptoms stem from FXTAS.  Doctors in U-M’s Neurogenetics clinic for adults, and the Pediatric Genetics Clinic at U-M’s C.S. Mott Children’s Hospital, routinely work together to address the needs of Fragile X families.

“We have some treatments for the symptoms that FXTAS patients have, but we do not yet have a cure,” says Todd, who regularly sees patients with FXTAS and related disorders.  “Better treatments are needed – and this new discovery might help lead to novel strategies for clearing away or preventing the buildup of this toxic protein.”

In addition, he says, the discovery that Fragile X ataxia results in part from RAN translation could have significance both for other diseases like amyotrophic lateral sclerosis (ALS, also called Lou Gehrig’s disease) and certain forms of dementia that are caused by DNA repeats. It can also aid our understanding of basic biology. “This may represent a new way in which translational initiation events occur, and may have importance beyond this one disease,” he notes. Further research on how RAN translation occurs, and why, is needed.

The idea that proteins can be created without a “start site” flies in the face of what most students of biology have learned in the last century. “In biology, we’re finding that the rules we once thought were hard and fast have some wiggle room,” Todd says.