Home » Brain & Nerves » Out of sync with the world: Brain study shows body clocks of depressed people are altered at cell level

ANN ARBOR, Mich. — Every cell in our bodies runs on a 24-hour clock, tuned to the night-day, light-dark cycles that have ruled us since the dawn of humanity. The brain acts as timekeeper, keeping the cellular clock in sync with the outside world so that it can govern our appetites, sleep, moods and much more. 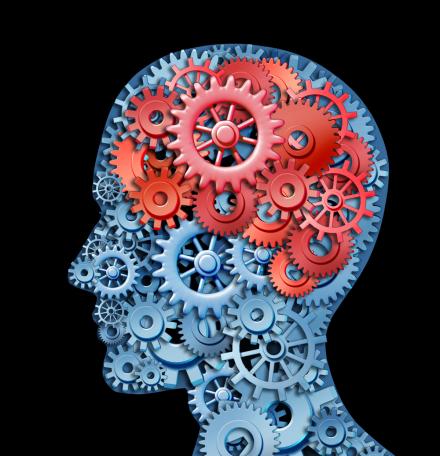 But new research shows that the clock may be broken in the brains of people with depression — even at the level of the gene activity inside their brain cells.

It’s the first direct evidence of altered circadian rhythms in the brain of people with depression, and shows that they operate out of sync with the usual ingrained daily cycle. The findings, in the Proceedings of the National Academy of Sciences, come from scientists from the University of Michigan Medical School and other institutions.

The discovery was made by sifting through massive amounts of data gleaned from donated brains of depressed and non-depressed people. With further research, the findings could lead to more precise diagnosis and treatment for a condition that affects more than 350 million people worldwide.

What’s more, the research also reveals a previously unknown daily rhythm to the activity of many genes across many areas of the brain – expanding the sense of how crucial our master clock is.

In a normal brain, the pattern of gene activity at a given time of the day is so distinctive that the authors could use it to accurately estimate the hour of death of the brain donor, suggesting that studying this “stopped clock” could conceivably be useful in forensics. By contrast, in severely depressed patients, the circadian clock was so disrupted that a patient’s “day” pattern of gene activity could look like a “night” pattern — and vice versa.

The work was funded in large part by the Pritzker Neuropsychiatric Disorders Research Fund, and involved researchers from the University of Michigan, University of California’s Irvine and Davis campuses, Weill Cornell Medical College, the Hudson Alpha Institute for Biotechnology, and Stanford University.

The team uses material from donated brains obtained shortly after death, along with extensive clinical information about the individual. Numerous regions of each brain are dissected by hand or even with lasers that can capture more specialized cell types, then analyzed to measure gene activity. The resulting flood of information is picked apart with advanced data-mining tools.

Lead author Jun Li, Ph.D., an assistant professor in the U-M Department of Human Genetics, describes how this approach allowed the team to accurately back-predict the hour of the day when each non-depressed individual died – literally plotting them out on a 24-hour clock by noting which genes were active at the time they died. They looked at 12,000 gene transcripts isolated from six regions of 55 brains from people who did not have depression.

This provided a detailed understanding of how gene activity varied throughout the day in the brain regions studied. But when the team tried to do the same in the brains of 34 depressed individuals, the gene activity was off by hours. The cells looked as if it were an entirely different time of day. 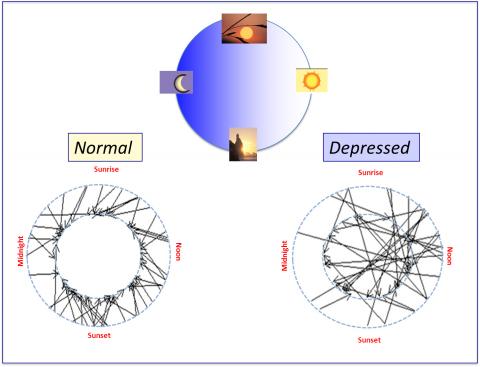 The researchers used gene expression patterns to try to predict the time of death for each person in the study (inner circles), and then compared it with the actual time of death (outer circles). The two matched closely in healthy people, as shown by the short lines between the two points in the left diagram. But in depressed people, the two were out of sync, as seen with the longer lines at right.

“There really was a moment of discovery,” says Li, who led the analysis of the massive amount of data generated by the rest of the team and is a research assistant professor in U-M’s Department of Computational Medicine at Bioinformatics. “It was when we realized that many of the genes that show 24-hour cycles  in the normal individuals were well-known circadian rhythm genes – and when we saw that the people with depression were not synchronized to the usual solar day in terms of this gene activity. It’s as if they were living in a different time zone than the one they died in.”

Huda Akil, Ph.D., the co-director of the U-M Molecular & Behavioral Neuroscience Institute and co-director of the U-M site of the Pritzker Neuropsychiatric Disorders Research Consortium, notes that the findings go beyond previous research on circadian rhythms, using animals or human skin cells, which were more easily accessible than human brain tissues.

“Hundreds of new genes that are very sensitive to circadian rhythms emerged from this research — not just the primary clock genes that have been studied in animals or cell cultures, but other genes whose activity rises and falls throughout the day,” she says. “We were truly able to watch the daily rhythm play out in a symphony of biological activity, by studying where the clock had stopped at the time of death. And then, in depressed people, we could see how this was disrupted.”

Now, she adds, scientists must use this information to help find new ways to predict depression, fine-tune treatment for each depressed patient, and even find new medications or other types of treatment to develop and test. One possibility, she notes, could be to identify biomarkers for depression – telltale molecules that can be detected in blood, skin or hair.

And, the challenge of determining why the circadian clock is altered in depression still remains. “We can only glimpse the possibility that the disruption seen in depression may have more than one cause. We need to learn more about whether something in the nature of the clock itself is affected, because if you could fix the clock you might be able to help people get better,” Akil notes.

The team continues to mine their data for new findings, and to probe additional brains as they are donated and dissected. The high quality of the brains, and the data gathered about how their donors lived and died, is essential to the project, Akil says. Even the pH level of the tissue, which can be affected by the dying process and the time between death and freezing tissue for research, can affect the results. The team also will have access to blood and hair samples from new donors.

The researchers note that the Pritzker funding in combination with federal research funding made it possible for the scientists to study this issue in an exploratory way. The research was historically funded by a Conte Center grant from the National Institute of Mental Health, and partly funded by the William Lion Penzner Foundation, the Della Martin Foundation, the Office of Naval Research (N00014-09-1-059 and N00014-12-1-0366), the National Alliance for Research on Schizophrenia and Depression’s Abramson Family Foundation Investigator Award, and an International Mental Health Research Organization – Johnson & Johnson Rising Star Translational Research Award.