A team of researchers at the Brain and Mind Institute at the University of Western Ontario took advantage of a pictorial illusion — known as the “connectedness illusion” — that causes people to underestimate the number of targets they see. 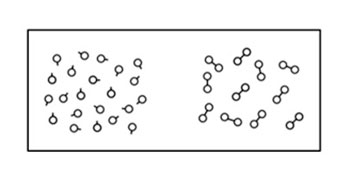 When people act on these targets, however, they can rapidly plan accurate and strategic reaches that reflect the actual number of targets.

“The Connectedness Illusion”: Connecting the circles creates the illusion of fewer circles on the right. But when our brain plans actions to these targets it computes the actual number of targets.

Using sophisticated statistical techniques to analyze participants’ responses to multiple potential targets, the researchers found that participants’ reaches to the targets were unaffected by the presence of the connecting lines.

Thus, the “connectedness illusion” seemed to influence the number of targets they perceived but did not impact their ability to plan actions related to the targets.

These findings indicate that the processes in the brain that plan visually guided actions are distinct from those that allow us to perceive the world.

“The design of the experiments allowed us to separate these two processes, even though they normally unfold at the same time,” explained lead researcher Jennifer Milne, a PhD student at the University of Western Ontario.

“It’s as though we have a semi-autonomous robot in our brain that plans and executes actions on our behalf with only the broadest of instructions from us!”

According to Mel Goodale, professor at the University of Western Ontario and senior author on the paper, these findings “not only reveal just how sophisticated the visuomotor systems in the brain are, but could also have important implications for the design and implementation of robotic systems and efficient human-machine interfaces.”

This work was supported by operating grants from the Natural Sciences and Engineering Research Council of Canada to J. C. Culham (Grant No. 249877 RGPIN) and M. A. Goodale (Grant No. 6313 2007 RGPIN).

For more information about this study, please contact: Melvyn A. Goodale at [email protected].

The APS journal Psychological Science is the highest ranked empirical journal in psychology. For a copy of the article “Connecting the Dots: Object Connectedness Deceives Perception but Not Movement Planning” and access to other Psychological Science research findings, please contact Anna Mikulak at 202-293-9300