Elderly brains learn, but maybe too much

PROVIDENCE, R.I. [Brown University] — A new study led by Brown University reports that older learners retained the mental flexibility needed to learn a visual perception task but were not as good as younger people at filtering out irrelevant information.

The findings undermine the conventional wisdom that the brains of older people lack flexibility, or “plasticity,” but highlight a different reason why learning may become more difficult as people age: They learn more than they need to. Researchers call this the “plasticity and stability dilemma.” The new study suggests older people may indeed be facing it.

“Plasticity may be kept OK, in contrast with the view of many researchers on aging who have said that the degree of plasticity of older people gets lower,” said Takeo Watanabe, the Fred M. Seed Professor at Brown University, corresponding author of the study in Current Biology. “However, we have found that the stability is problematic. Our learning and memory capability is limited. You don’t want older, existing important information that is already stored to be replaced with trivial information.” 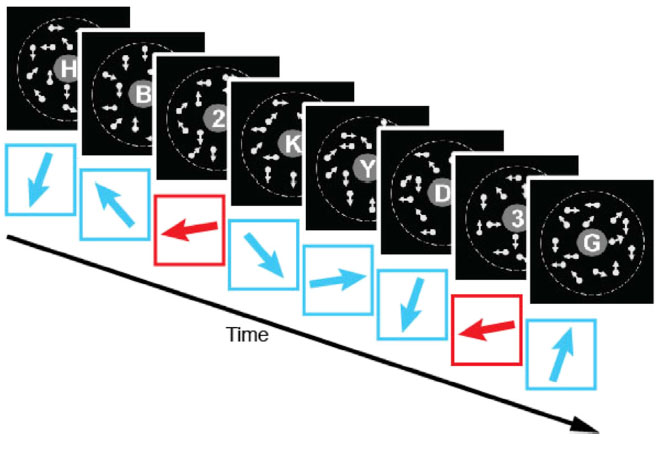 To conduct the study, Watanabe and his team enrolled a group of 10 people between 67 and 79 years old and another group of 10 people ages 19 to 30 for an experiment. Over a nine-day period, they trained on a simple visual exercise: Shown a quick sequence of six symbols – four letters and two numerals – volunteers were asked to report the numerals they saw. Their performance on a test at the end of training was compared to their score on a pre-test.

Dealing with distraction
Subjects were shown a sequence of letters and numbers with the distraction of dots moving in the background. Behind the numerals the dot motion became more coherent (as indicated by the arrows).

The volunteers were explicitly instructed to only bother with spotting the two numerals, but each symbol they saw had a background of moving dots. Unbeknownst to the subjects, those dots would move with varying degrees of cohesiveness of direction. In the pre- and post-tests the researchers also asked the volunteers to report the direction of dot movement when they saw the numerals.

The results of the testing were telling. Older people improved as much as younger people on the relevant task of identifying the two numerals.

“These results indicate that older subjects as well as younger subjects showed significant amounts of task-relevant learning,” the authors wrote. “No evidence was obtained that indicates that older individuals have a problem with plasticity.”

Last week, in fact, Watanabe and colleagues published a study showing that plasticity during visual learning occurs in older people as well as younger ones, but it is manifest differently in the brains of the different groups.

But in this study when it came to the irrelevant skill of discerning the prevailing direction of dot movement, older people learned that, too, even when it was at its most obvious. Younger people, meanwhile, only showed improvement on discerning movement when it was insidiously subtle. If it was clear, they recognized it and filtered it out.

The idea that the most obvious signals were the most easily filtered, suggested that the difference between older and younger learners was a matter of attention.

Watanabe said the finding is not necessarily discouraging news. Perhaps filtering can be improved with some kind of training.

“The hope is that maybe what older people need to do is to learn a skill to avoid learning what is not necessary,” he said.

In addition to Watanabe, other authors of the paper are Li-Hung Chang, formerly of Brown but now of National Yang-Ming University in Taiwan; Yuka Sasaki, associate professor (research) of cognitive, linguistic, and psychological sciences, and Kazuhisa Shibata of Brown; and George Andersen of the University of California–Riverside.