PROVIDENCE, R.I. [Brown University] — Even in its quietest moments, the brain is never “off.” Instead, while under anesthesia, during slow-wave sleep, or even amid calm wakefulness, the brain’s cortex maintains a cycle of activity and quiet called “up” and “down” states. A new study by Brown University neuroscientists probed deep into this somewhat mysterious cycle in mice, to learn more about how the mammalian brain accomplishes it.

In addition to an apparent role in maintaining a baseline of brain activity, the up and down cycling serves as a model for other ways in which activity across the cortex is modulated, said Garrett Neske, graduate student and lead author. To study how the brain maintains this cycling, he found, is to learn how the brain walks a healthy line between excitement and inhibition as it strives to be idle but ready, a bit like a car at a stoplight. 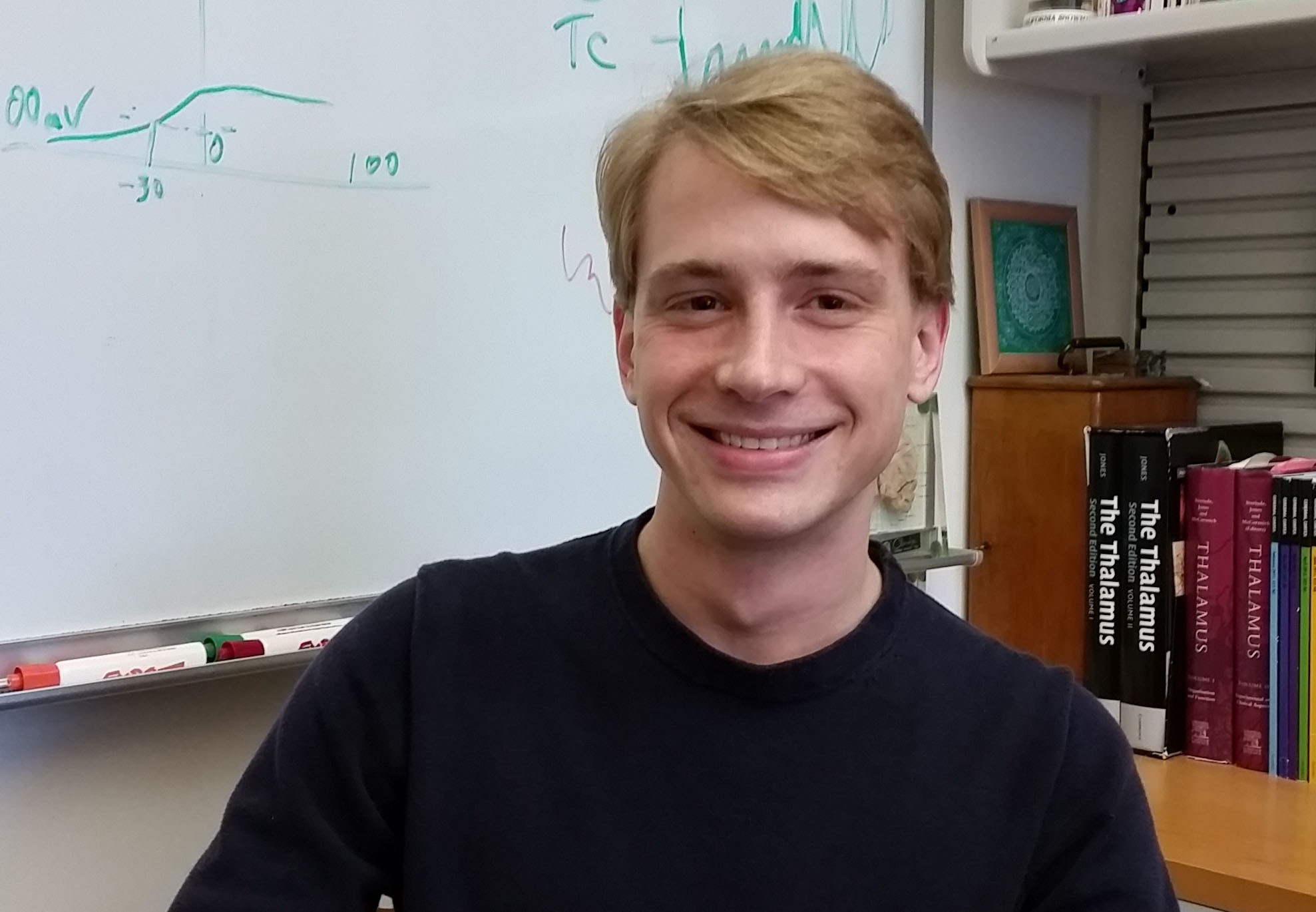 Garrett Neske
To study how the brain maintains up and down cycles is to learn how the brain strives to be idle but ready, a bit like a car at a stoplight.
Photo: David Orenstein/Brown University

“It is very important to regulate that balance of excitation and inhibition,” said senior author Barry Connors, professor and chair of neuroscience at Brown. “Too much excitation relative to inhibition you get a seizure, too little you become comatose. So whether you are awake and active and processing information or whether you are in some kind of idling state of the brain, you need to maintain that balance.”

The cycling may seem simple, but what Neske and Connors found in their investigation, published in the Journal of Neuroscience, is that it involves a good deal of complexity. They focused on five different types of cells in a particular area of the mouse cortex and found that all five appear to contribute uniquely to the ups and downs.

Cells in a barrel

Specifically the researchers, including Saundra Patrick, neuroscience research associate and second author, looked at the activity of excitatory pyramidal cells and four kinds of inhibitory interneurons (PV, SOM, VIP and NPY) in different layers of the barrel cortex. That part of the cortex is responsible for processing sensations on the face, including the whiskers.

Neske induced up and down cycles in slices of tissue from the barrel cortex and recorded each cell type’s electrical properties and behaviors, such as its firing rate and the amounts of excitation and inhibition they received from other neurons.

The picture that emerged is that all types of interneurons were active. This included the most abundant interneuron subtype (the fast-spiking PV cell), and the various more slowly spiking subtypes (SOM, VIP, NPY). In fact, Connors said, the latter cells were active at levels similar to or higher than neighboring excitatory cells, contributing strong inhibition during the up state.

One way such findings are important is in how they complement recent ones by another research group at Yale University. In that study scientists looked at a different part of the cortex called the entorhinal cortex. There they found that only one inhibitory neuron, PV, seemed to be doing anything in the up state to balance out the excitement of the pyramidal neurons. The other inhibitory neurons stayed virtually silent. In his study, Neske replicated those results.

Taken together, the studies indicate that even though up and down cycles occur throughout the cortex, they may be regulated differently in different parts.

“It suggests that inhibition plays different roles in persistent activity in these two regions of cortex and it calls for more comparative work to be done among cortical areas,” Neske said. “You can’t just use one cortical region as the model for all inhibitory interneuron function.”

From observation to manipulation

Since observing the different behaviors of the neuron types, Neske has moved on to manipulating them to see what role each of them plays. Using the technique of optogenetics, in which the firing of different neuron types can be activated or suppressed with pulses of colored light, Neske is experimenting with squelching different interneurons to see how their enforced abstention affects the up and down cycle.

When the work is done, he should emerge with an even clearer idea of the brain’s intricate and diligent efforts to remain balanced between excitation and inhibition.