For the first time, Carnegie Mellon University scientists have traced the brain processes that occur during the learning of technical concepts. Published in NeuroImage, the findings reveal how new technical knowledge is built up in the brain during the course of different learning stages. The findings foreshadow the capability to assess the effectiveness of instruction and efficiency of learning by monitoring changes in the brain. 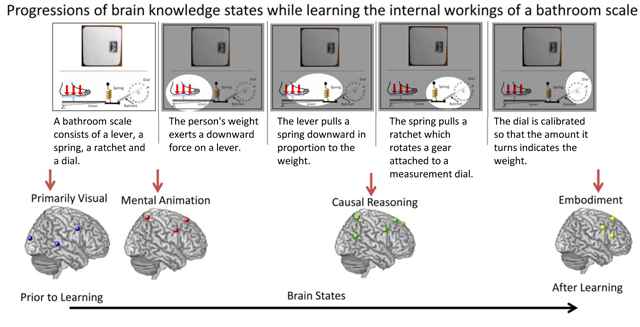 “This study yields an initial, brain-grounded, theory of learning of mechanical systems that can be related to the instructional methods and resulting cognitive processes that underlie science learning. It will be possible to assess whether some instructional sequences lead to better — or more expert-like — brain outcomes than other sequences. This will enable instructors to ‘teach to the brain’ instead of ‘teaching to the test,’” said Marcel Just, the D. O. Hebb University Professor of Psychology in the Dietrich College of Humanities and Social Sciences.

Just and his CMU colleague Robert Mason, the lead author of the study, scanned the brains of 16 healthy adults as they learned for the first time how four common mechanical systems work. While inside the brain scanner, the participants were shown a series of pictures, diagrams and text that described the internal workings of a bathroom scale, fire extinguisher, automobile braking system and trumpet.

The explanation sequence allowed the researchers to examine the participants’ brain states after each learning step. For example, the bathroom scale was presented with a schematic diagram and description, “A bathroom scale consists of a lever, a spring, a ratchet and a dial.” Then, the operation of the scale was described in a set of causal explanations such as, “The person’s weight exerts a downward force on a lever. The lever pulls a spring downward in proportion to the weight.” The relevant parts of the schematic design were highlighted with each explanation sentence.

Just and Mason were able to use the fMRI images to follow how each new concept made its way from the words and pictures to neural representations over many regions of the brain. Interestingly, they found that the neural representations progressed through several stages, with each stage involving different parts of the brain that play different roles. At first, the mechanical systems were represented primarily visually, in terms of their physical layout. In middle stages, the learners used mental animation, imagining the motion of the mechanical components to infer how they interacted in a causal chain, engaging a cortically diverse network of parietal, temporal and frontal regions. By the end of the instruction, the participants imagined how a person (most likely themselves) would interact with the system, using both their frontal and motor brain regions.

This novel research merges brain science and instructional innovation, two of Carnegie Mellon’s university-wide initiatives. As the birthplace of artificial intelligence and cognitive psychology, Carnegie Mellon has been a leader in the study of brain and behavior for more than 50 years. The university has created some of the first cognitive tutors, helped to develop the Jeopardy-winning Watson, founded a groundbreaking doctoral program in neural computation, and completed cutting-edge work in understanding the genetics of autism. Building on its strengths in biology, computer science, psychology, statistics and engineering, CMU recently launched BrainHubSM, a global initiative that focuses on how the structure and activity of the brain give rise to complex behaviors.

Named for Herbert Simon, the late CMU Nobel Laureate, professor and co-founder of artificial intelligence, the Simon Initiative harnesses a cross-disciplinary ecosystem of learning science that has developed over several decades at CMU, with the goal of measurably improving student learning outcomes.

The Office of Naval Research funded this study.

For more information, visit http://www.ccbi.cmu.edu/ or read the article at http://authors.elsevier.com/a/1QZyU3lc~qsem9.