Thanks to Carnegie Mellon University advances in brain imaging technology, we now know how specific concrete objects are coded in the brain, to the point where we can identify which object, such as a house or a banana, someone is thinking about from its brain activation signature.

Now, CMU scientists are applying this knowledge about the neural representations of familiar concepts by teaching people new concepts and watching the new neural representations develop. Published in Human Brain Mapping, the scientists have — for the first time — documented the formation of a newly learned concept inside the brain, which shows that it occurs in the same brain areas for everyone. 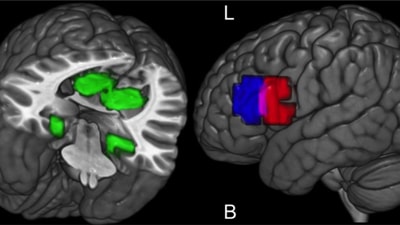 The set of “habitat” brain regions (green) and “diet” regions (red and blue) where the new knowledge was stored.

This novel research merges brain science and instructional innovation, two of Carnegie Mellon’s university-wide initiatives — BrainHubSM, which focuses on how the structure and activity of the brain give rise to complex behaviors, and the Simon Initiative, which aims to measurably improve student learning outcomes by harnessing decades of learning science research.

Marcel Just, a leading neuroscientist, pointed to the Smithsonian Institute’s 2013 announcement about the olinguito, a newly identified carnivore species that mainly eats fruits and lives by itself in the treetops of rainforests, as an example of the type of new concept that people learn.

“Millions of people read the information about the olinguito and in doing so permanently changed their own brains,” said Just, the D.O. Hebb University Professor of Cognitive Neuroscience in CMU’s Dietrich College of Humanities and Social Sciences. “Our research happened to be examining this process precisely at that time in a laboratory setting. When people learned that the olinguito eats mainly fruit instead of meat, a region of their left inferior frontal gyrus — as well as several other areas — stored the new information according to its own code.” 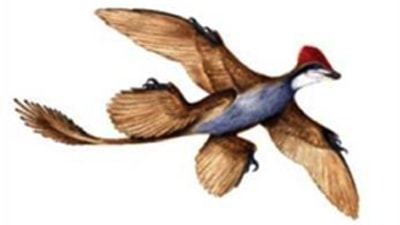 The study participants learned about the habitat and diet of eight animals, such as the cytar.

Just added, “The new knowledge gained from the Smithsonian’s announcement became encoded in the same brain areas in every person that learned the new information, because all brains appear to use the same filing system.”

For the study, Andrew Bauer, a Ph.D. student in psychology, and Just taught 16 study participants diet and dwelling information about extinct animals to monitor the growth of the neural representations of eight new animal concepts in the participants’ brains.

Drawing on previous findings, the research team knew “where” to expect the new knowledge to emerge in the brains of their participants. Information about dwellings and information about eating have each been shown to reside in their own set of brain regions, regions that are common across people.

Over the course of an hour, the study participants were given a zoology mini-tutorial on the diets and habitats of the animals, while the scientists used functional magnetic resonance imaging (fMRI) to monitor the emergence of the concepts in the participants’ brains. As the new properties were taught, the activation levels in the eating regions and the dwelling regions changed.

One important result was that after the zoology tutorial, each one of the eight animal concepts developed its own unique activation signature. This made it possible for a computer program to determine which of the eight animals a participant was thinking about at a given time. In effect, the program was reading their minds as they contemplated a brand-new thought.

For the first time CMU scientists have documented the formation of a newly learned concept inside the brain, which shows that it occurs in the same brain areas for everyone.

“The activation signature of a concept is a composite of the different types of knowledge of the concept that a person has stored, and each type of knowledge is stored in its own characteristic set of regions,” Just said.

Another important result was that once a property of an animal was learned, it remained intact in the brain, even after other properties of the animal had been learned. This finding indicates the relative neural durability of what we learn.

“Each time we learn something, we permanently change our brains in a systematic way,” said Bauer, the study’s lead author. “It was exciting to see our study successfully implant the information about extinct animals into the expected locations in the brain’s filing system.”

Just believes that the study provides a foundation for brain researchers to trace how a new concept makes its way into the brain from the words and graphics used to teach it, foreshadowing a capability to assess the progress in learning a complicated concept like those in a high-school physics lesson. fMRI pattern analyses could diagnose which aspects of a concept students misunderstand (or lack), in a way that could guide the next iteration of instruction.

The results from this study also indicate that it may be possible to use a similar approach to understand the “loss” of knowledge in various brain disorders, such as dementia or Alzheimer’s disease, or due to brain injuries. The loss of a concept in the brain may be the reverse of the process that the study observed.

As the birthplace of artificial intelligence and cognitive psychology, Carnegie Mellon has been a leader in the study of brain and behavior for more than 50 years. The university has created some of the first cognitive tutors, helped to develop the Jeopardy-winning Watson, founded a groundbreaking doctoral program in neural computation, and completed cutting-edge work in understanding the genetics of autism. Building on its strengths in biology, computer science, psychology, statistics and engineering, CMU recently launched BrainHubSM, a global initiative. The Simon Initiative is named for Herbert Simon, the late CMU Nobel Laureate, professor and co-founder of artificial intelligence.

The Office of Naval Research funded this study.