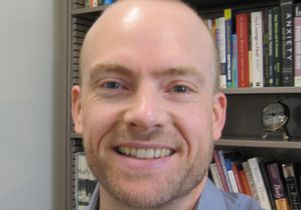 Tens of millions of Americans — an estimated 1 to 2 percent of the population — will suffer at some point in their lifetimes from obsessive-compulsive disorder, a disorder characterized by recurrent, intrusive, and disturbing thoughts (obsessions), and/or stereotyped recurrent behaviors (compulsions). Left untreated, OCD can be profoundly distressing to the patient and can adversely affect their ability to succeed in school, hold a job or function in society.

One of the most common and effective treatments is cognitive-behavioral therapy, which aims to help patients understand the thoughts and feelings that influence their behaviors and then work toward eliminating them. But not all OCD sufferers benefit over the long term: In an estimated 20 percent of patients, symptoms eventually return after the therapy is complete.

A new study by researchers at the Semel Institute for Neuroscience and Human Behavior at UCLA suggests that a certain detail from patients’ brain scans could help clinicians identify which people are more likely to relapse after cognitive-behavioral therapy — and why.

“The efficiency of brain network connectivity before treatment predicts the worsening of symptoms after treatment,” said Jamie Feusner, a UCLA associate professor of psychiatry and director of the Semel Institute’s Adult OCD Program.

Feusner and Joseph O’Neill, a UCLA associate professor of child psychiatry and a research scientist at the Semel Institute, were the study’s co-principal investigators. The research was published in the open-access journal Frontiers in Psychiatry.

The researchers used functional magnetic resonance imaging, or fMRI, to study the brains of 17 people, aged 21 to 50 years old, with OCD. Scans were taken both before and immediately after the patients completed an intensive four-week course of cognitive-behavioral therapy, and the doctors monitored the patients’ clinical symptoms over the next 12 months.

However, the researchers also found that people who had more efficient brain connectivity before they began treatment actually did worse in the follow-up period. Surprisingly, neither the severity of symptoms before treatment nor the amount that symptoms improvement during treatment were accurate predictors of the patients’ post-treatment success.

The researchers say that knowing more about which patients might not fare well long-term could potentially help doctors and patients choose the best course of treatment.

“Cognitive-behavioral therapy is in many cases very effective, at least in the short term. But it is costly, time-consuming, difficult for patients and, in many areas, not available,” Feusner said. “Thus, if someone will end up having their symptoms return, it would be useful to know before they get treatment.”

The UCLA study was the first to use brain connectivity to help predict a post-treatment clinical course, and the first to test the effects of cognitive-behavioral therapy on brain network connectivity. Feusner and his colleagues are conducting several other studies to understand the effects of the treatment on the brain in people with OCD and with other OCD-related disorders, including body dysmorphic disorder and anorexia nervosa.

“We are now starting to translate knowledge of the brain into useful information that in the future could be used by doctors and patients to make clinical decisions,” Feusner said. “Although a brain scan may seem expensive, these scans only took about 15 minutes and thus the cost is not exceptionally high, particularly in comparison to medication or cognitive-behavioral therapy treatments, which over time can cost many thousands of dollars.”

Feusner, O’Neill and their colleagues plan to conduct another study in a larger number of patients in an attempt to validate the findings; they also will assess additional measures of brain function and structure that they hope will offer more clues to determining the long-term course of symptoms in people being treated for OCD.

The research was funded by a grant from the National Institute of Mental Health (R01MH085900).