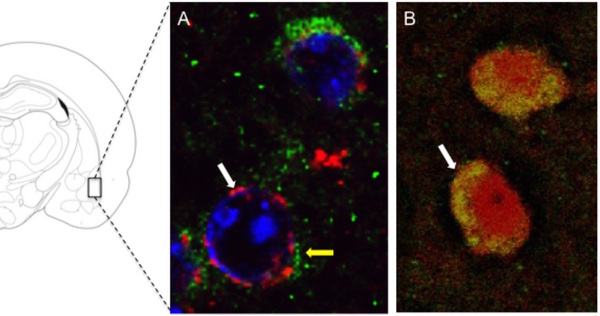 Panel A shows that the two proteins (in red and green) that were found to mediate the post-traumatic stress disorder (PTSD)-like behavioral abnormalities are located on membranes of the same cells. Panel B shows which specific type of cell contains these proteins.

A new study by University of Wisconsin-Madison neuroscientists shows how stress chemicals reshape the brains of rodents, research that could lead to better treatments for people with post-traumatic stress disorder (PTSD).

Long after traumatic events such as war, abuse and car accidents, the brains of people with PTSD overreact to loud noises and other stimuli with an exaggerated startle response. Other hallmarks of the disorder include nightmares, insomnia, flashbacks and heightened anxiety, which make it difficult for people to have a normal life. Lacking good treatments, people with PTSD often self-medicate with alcohol and other drugs.

“We have created a rodent model that systematically delineates the chemical steps that occur in the brain in response to trauma, and how these steps ultimately lead to the hallmark features of PTSD: exaggerated startle responses to mild stimuli, long after the stressful experience,” says Vaishali Bakshi, associate professor of psychiatry in the UW School of Medicine and Public Health.

“This is exciting because rodent brains and human brains are wired the same way; new medications for PTSD can be identified by understanding which brain chemicals are mediating trauma effects.”

The study was published recently in the Journal of Neuroscience.

Bakshi says her lab’s “predator stress” model involves exposing a rat for five minutes to a ferret that is just outside its wire cage. There is no physical contact but the rat can see, hear and smell the ferret, a natural predator. Rats that were psychologically traumatized by the ferret still showed exaggerated startle responses to low-level or innocuous challenges a month after the last exposure. This is the equivalent of two to three years in humans, and closely mimics the time course for the exaggerated reactivity that characterizes PTSD.

She says this model more closely captures the essential element of the type of psychological trauma that causes PTSD, because it matches how people with the disorder describe their own traumatizing events. “We know that people commonly say they thought they were going to die, and that’s how the rats react to the ferret,” she says.

“This is exciting because rodent brains and human brains are wired the same way; new medications for PTSD can be identified by understanding which brain chemicals are mediating trauma effects.”

This fear response to the repeated psychological trauma created permanent changes in the brain. The repeated exposure to the predator-stress model caused long-lasting hypersensitivity of a certain protein, the alpha1 noradrenergic receptor, in a specific part of the brain known to regulate fear responses: the basolateral amygdala. This receptor hypersensitivity in turn led to exaggerated startle in the traumatized rats, similar to what is seen in PTSD patients. Control rats that never underwent the predator stress had completely normal startle responses.

Moreover, Bakshi’s group identified the chemical in the basolateral amygdala that created the hypersensitivity of the alpha1 receptor. This chemical, a protein called corticotropin-releasing factor (CRF), is released into the basolateral amygdala with each trauma exposure; this repeated CRF release causes the hypersensitivity of the alpha-1 receptor that leads to abnormally exaggerated startle.

Brian Baldo, an assistant professor of psychiatry and collaborator on the project, showed that the proteins (receptors) that mediate the effects of CRF are located on the same amygdala cells as the alpha1 receptors, providing an anatomical framework for understanding the interactions between these two neurochemical systems. Blocking CRF specifically within the basolateral amygdala prevents the PTSD-like profile from developing after trauma exposure.

“We believe the mechanism we discovered … could also be important for stress-induced drug abuse, which is a common problem in people with PTSD.”

Additionally, the study found that cells in the basolateral amygdala that are getting sensitized by trauma exposure project to several other parts of the brain that are important for fear, anxiety and drug abuse.

“We believe the mechanism we discovered for trauma-induced ‘re-wiring’ of the amygdala could also be important for stress-induced drug abuse, which is a common problem in people with PTSD,” says Baldo, an expert on reward and addiction.

By discovering the specific chemicals in discrete parts of the brain that control the responses to trauma exposure, Bakshi says her lab can identify possible new medication targets for treating PTSD.

“For example, any chemical that prevents the trauma-induced hypersensitivity of these basolateral amygdala cells from taking place could be a potential new drug target for PTSD prophylaxis,” Bakshi notes. “Imagine how powerful it would be to have a medication that could be taken soon after the trauma occurs so that the sensitized PTSD response never develops. Our model has the ability to identify such chemicals.”

The lead author of the paper is Abha Rajbhandari, who carried out the studies as a graduate student in the Neuroscience Training Program. The study was supported by grants from the National Institute of Mental Health and NARSAD Young Investigator Grant from the Brain and Behavior Research Foundation.