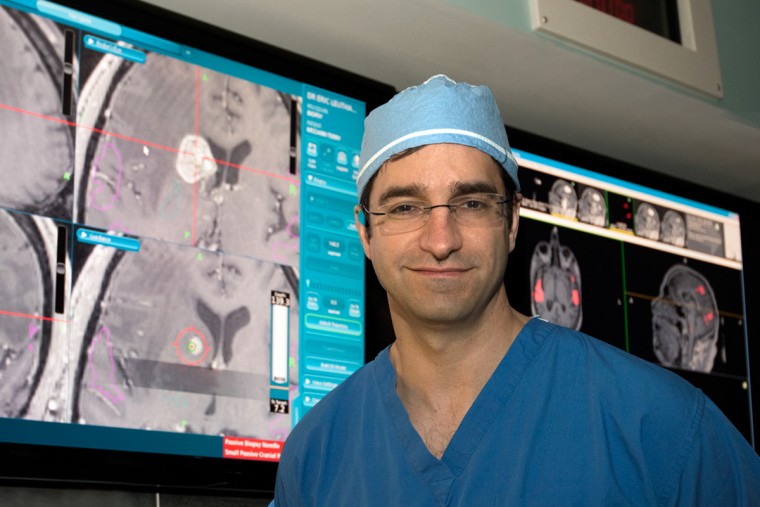 Washington University neurosurgeon Eric C. Leuthardt, MD, and others have discovered another benefit of laser surgery for patients with glioblastomas, one of the most difficult cancers to treat. In addition to killing the tumors with heat, the technology bypasses the brain’s protective cover to allow for up to six weeks of chemotherapy. (Photo: Robert Boston/School of Medicine)

Using a laser probe, neurosurgeons at Washington University School of Medicine in St. Louis have opened the brain’s protective cover, enabling them to deliver chemotherapy drugs to patients with a form of deadly brain cancer.

In a pilot study, 14 patients with glioblastoma – the most common and aggressive type of brain cancer – underwent minimally invasive laser surgery to treat a recurrence of their tumors. Heat from the laser is known to kill brain tumor cells but, unexpectedly, the researchers found that the technology can penetrate the blood-brain barrier.

“The laser treatment kept the blood-brain barrier open for four to six weeks, providing us with a therapeutic window of opportunity to deliver chemotherapy drugs to the patients,” said co-corresponding author Eric C. Leuthardt, MD, a Washington University professor of neurosurgery who treats patients at Barnes-Jewish Hospital. “This is crucial because most chemotherapy drugs can’t get past the protective barrier, greatly limiting treatment options for patients with brain tumors.

“We are closely following patients in the trial,” said Leuthardt, who also is a Siteman Cancer Center member. “Our early results indicate that the patients are doing much better on average, in terms of survival and clinical outcomes, than what we would expect. We are encouraged but very cautious because additional patients need to be evaluated before we can draw firm conclusions.”

The study is published online Feb. 24 in the journal PLOS ONE.

Glioblastomas are one of the most difficult cancers to treat. Most patients diagnosed with this type of brain tumor survive just 15 months, according to the American Cancer Society.

The new research is part of a larger phase II clinical trial that will involve 40 patients. Twenty patients were enrolled in the pilot study, 14 of whom were found to be suitable candidates for the minimally invasive laser surgery, a technology that Leuthardt helped pioneer.

The laser technology was approved by the Food and Drug Administration in 2009 as a surgical tool that can be used to treat brain tumors. But the new research marks the first time the laser has been shown to disrupt the blood-brain barrier, which shields the brain from harmful toxins but inadvertently blocks potentially helpful drugs, such as chemotherapy.

As part of the trial, a widely used chemotherapy – doxorubicin – was given intravenously to 13 patients in the weeks following the laser surgery. Preliminary data indicate that 12 patients showed no evidence of tumor progression during the short, 10-week time frame of the study. One patient experienced tumor growth before chemotherapy was delivered; the tumor in another patient progressed after chemotherapy was administered.

The laser surgery was well-tolerated by the patients in the trial. Most patients went home one to two days afterward and none experienced severe complications. The surgery is performed while a patient lies in an MRI scanner, providing the neurosurgical team with a real-time look at the tumor. Using an incision of only 3 millimeters – about the thickness of two pennies – a neurosurgeon robotically inserts the laser to heat up and kill brain tumor cells at a temperature of about 150 degrees Fahrenheit.

“The laser kills tumor cells, which we anticipated,” said Leuthardt, who also directs the Department of Neurosurgery’s Center for Innovation in Neuroscience and Technology and the Brain Laser Center. “But, surprisingly, while reviewing MRI scans of our patients, we noticed changes near the former tumor site that looked consistent with the breakdown of the blood-brain barrier.” He then confirmed and further studied these imaging findings with co-author Joshua Shimony, MD, PhD, an associate professor of radiology at Washington University.

The researchers, including co-corresponding author David Tran, MD, PhD, a neuro-oncologist who is now at the University of Florida, performed follow-up testing, which showed that the degree of permeability through the blood-brain barrier peaked one to two weeks after surgery but that the barrier remained open for up to six weeks.

Other successful attempts to breach the barrier have left it open for only a short time – about 24 hours – not long enough for chemotherapy to be consistently delivered – or have resulted in only modest benefits. In contrast, the laser technology leaves the barrier open for weeks – long enough for patients to receive multiple treatments with chemotherapy. And the laser only opens the barrier near the tumor, leaving the protective cover in place in other areas of the brain. This has the potential to limit the harmful effects of chemotherapy drugs in other areas of the brain, the researchers said.

The findings also suggest that other exciting approaches such as cancer immunotherapy – which harnesses cells of the immune system to seek out and destroy cancer – also may be useful for patients with glioblastomas. The researchers are planning another clinical trial that combines the laser technology with chemotherapy and immunotherapy as well as trials to test targeted cancer drugs that normally can’t breach the blood-brain barrier.

“We are hopeful this technology opens new avenues to treating these devastating brain tumors that cause great suffering for patients and their families,” Leuthardt said.

Funding for this research was provided by the National Cancer Institute of the National Institutes of Health (NIH), grant number K08CA160824; The Foundation for Barnes-Jewish Hospital; and Washington University School of Medicine in St. Louis.

Siteman Cancer Center, ranked among the top cancer treatment centers by U.S. News & World Report, also is one of only a few cancer centers in the U.S. to receive the highest rating of the National Cancer Institute (NCI). Comprising the cancer research, prevention and treatment programs of Barnes-Jewish Hospital and Washington University School of Medicine in St. Louis, Siteman is Missouri’s only NCI-designated Comprehensive Cancer Center and the state’s only member of the National Comprehensive Cancer Network.