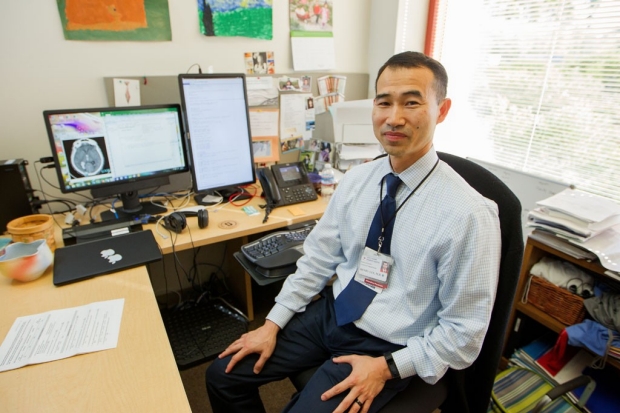 Henry Lee and his colleagues found that steriod treatments given before birth can protect premature infants agains brain hemorrhages after they are born.
Norbert von der Groeben

Prenatal steroid treatment reduces by half a premature baby’s risk for a severe form of brain hemorrhage after birth, a study from the Stanford University School of Medicine has found.

The research, on nearly 26,000 premature infants, demonstrated that the benefit applies even to the earliest born preemies, who can be overlooked as potential candidates for this steroid treatment.

The study was published online March 24 in the Journal of Perinatology. The senior author is Henry Lee, MD, assistant professor of pediatrics. The lead author is Julia Wei, who was a graduate student at the University of California-Berkeley School of Public Health when the study was conducted.

The researchers evaluated steroid treatments that were originally developed to mature fetal lungs before premature birth. Studies from the 1990s and early 2000s suggested that these steroids also protect preemies’ brains, but the Stanford team was unsure if the benefit held in the context of modern neonatal care. The team also wondered about extremely premature babies, a population that had not been enrolled in the original clinical trials evaluating the effects of steroids on lung maturation.

“When steroids first came out, they were being used only in babies born at 26 weeks of pregnancy or older,” said Lee, who is also a neonatologist at Lucile Packard Children’s Hospital Stanford and Stanford Children’s Health. “But we’ve now been able to show that even in babies born as early as 22 to 24 weeks, steroid treatment has a very strong benefit for the brain. This may expand the group of babies we would recommend using steroids for.”

Current recommendations from the National Institutes of Health suggest giving steroids to mothers likely to deliver between 24 and 34 weeks of pregnancy, Lee noted.

This may expand the group of babies we would recommend using steroids for.

The researchers analyzed data on 25,979 infants born between 2007 and 2013. The data were drawn from the California Perinatal Quality Care Collaborative, which collects information about nearly all California births for preterm neonates. Infants were included in the study if they arrived between 22 and 32 weeks of pregnancy and weighed less than 3.3 pounds at birth. A normal pregnancy lasts 40 weeks.

Among the infants studied, 87 percent were born to mothers who received steroids in anticipation of a premature delivery. The risk of all types of intraventricular hemorrhage was one-third lower in babies of mothers who received prenatal steroids than in those whose mothers didn’t receive prenatal steroids. For the most severe forms of IVH, the risk was cut in half. The drop in risk was statistically significant for babies born between 22 and 29 weeks of pregnancy, but not for those born at 30 weeks or later, the study said.

“We speculate that steroids may accelerate the maturation of blood vessels in the brain and make them stronger,” Lee said. “That may make the baby less vulnerable to rapid shifts in blood pressure, which could otherwise cause bleeding similar to a stroke.”

The rate of intraventricular hemorrhage in premature babies has declined since the 1980s, Lee noted. “That change is probably not due to only one thing, but more to our overall awareness of how to take better care of the baby before and after birth,” he said. For example, in addition to using prenatal steroids more often, doctors and nurses also keep premature babies’ heads in a stable position during the first few days of life, and attempt to avoid dramatic shifts in preemies’ blood pressure.

“It’s helpful to know that prenatal steroids are an impactful component to our strategy to prevent these potentially devastating hemorrhages,” Lee said. He thinks the new finding will be welcome news not just for other physicians but also for the parents of preemies.

“When I talk with these parents, I’m often describing risks and potential complications for their baby,” he said. “It helps to be able to talk not just about risks but also about proven therapies — to say, ‘Here is a therapy that we have found to be very beneficial.’”

The research was funded by the Eunice Kennedy Shriver National Institute of Child Health & Human Development (grants K23HD068400 and HD083368.)