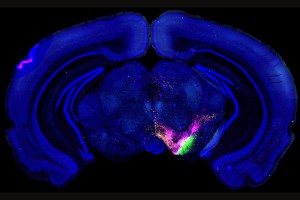 To understand how information is communicated throughout the brain, the mouse connectome project (MCP) at USC uses multiple fluorescent-labeled dyes to trace the connections among all identified structures of the mouse brain. The dyes get injected into specific brain structures and get transported to target structures that are connected with the injection site. The image below is one 50 micrometer-thick section of the mouse brain that contains labeling from three dyes injected into three different brain structures, indicating the unique connections of each injection.
Image courtesy of the MCP (www.mouseconnectome.org) at the USC Stevens Neuroimaging and Informatics Institute

Brain connectivity atlas assists in the understanding of mental and neural disorders.

Hong-Wei Dong, an associate professor of neurology at the USC Mark and Mary Stevens Neuroimaging and Informatics Institute, and his colleagues have been sketching a road map of the mouse brain for the past decade. Their most recent study, published in the journal Nature Neuroscience on June 20, looked at the connections of a part of the brain that is responsible for motor learning, the dorsal striatum, which is stationed near the front of the brain.

Scientists injected fluorescent molecules into about 150 mouse brain structures and used a high-resolution microscope to document the molecules as they moved through the brain’s “cellular highways,” which need to be in tip-top shape for different parts of the brain to communicate and coordinate behaviors. In the previously unsurveyed dorsal striatum, USC researchers were able to identify 29 distinct areas responsible for things such as eye movement, mouth and facial movements and pain information processing. They also located hubs that coordinate complex limb movements.

Parkinson’s disease, obsessive compulsive disorder, attention deficit hyperactivity disorder and many other movement disorders involve connections of this brain region, said Dong, senior author of the study. Researchers in the Dong Lab followed circuitry paths from beginning to end in the same way someone might pick up a ball of yarn and slowly unravel it.

“This study moves researchers to the next level to help them understand how the brain circuit is disrupted,” Dong said. “Previously the dorsal striatum was one huge thing. It’s almost like telling someone they should come visit you in California. Where should they go? We have really narrowed it down – I live in North Hollywood in this apartment building. That will help people in the future to really understand the pathways for diseases with specific symptoms.”

Early symptoms of Huntington’s disease, for example, include slow or abnormal eye movement and stuttering. Most patients experience depression and have psychiatric issues such as social withdrawal and insomnia, Dong said. His lab has subdivided the dorsal striatum so scientists can better predict problem areas in this brain structure and focus their research there.

“Of course, humans and mice are different, but they are both mammals,” Dong said. “The biggest differences reside in high-level cognition. So we can use the organization of the mouse brain to understand how human brains are organized.”

After all, most scientific research begins at the mouse level. Understanding the mouse brain is of critical importance and will potentially lead to the development of new drugs and medical therapies.

The cerebral cortex is the brain’s CEO; it regulates higher-order functions such as motor learning and attention through its connections to brain structures such as the dorsal striatum, which is historically divided into just four regions. Today, USC researchers said they are the first to create the most comprehensive map of connections between the dorsal striatum and the cerebral cortex that is available for any mammal.

“If you have one big structure, it’s very difficult to know which part is the problem area,” said Houri Hintiryan, lead author and assistant professor of research at the Laboratory of Neuro Imaging at the Keck School of Medicine of USC. “This study shows 29 different parts of this brain region receiving information from the cerebral cortex. We’re providing a structural basis for studies seeking to understand which part of the brain does what.”

The big data project is publicly available at the Mouse Connectome Project and will aid in the leap toward precision medicine, Dong said. Next on his team’s mapping list is the hippocampus, which is the center of emotion, memory and the autonomic nervous system. A detailed atlas of this area could further Alzheimer’s disease research.

“With our brain map, researchers could look for circuitry-specific drug discovery,” Dong said. “Now we provide a very clear map to help people do stem cell research. They know exactly where to put stem cells.”

Dong chose to map the mouse brain so his lab could examine individual neurons and axons, gateways to neighboring neurons. In contrast, the human brain would look pixelated if the scientists zoom in for the detail needed to develop their meticulous maps.

Many USC scientists use big data to find answers to intractable problems such as Alzheimer’s disease and PTSD. USC houses the Global Alzheimer’s Association Interactive Network (GAAIN), which is the first usable online platform that provides scientists with Alzheimer’s disease research data and tools. GAAIN contains data on over 366,000 subjects and is home to the largest brain-mapping project in the world.

Image: To understand how information is communicated throughout the brain, the Mouse Connectome Project (MCP) at USC uses multiple fluorescent-labeled dyes to trace the connections among all identified structures of the mouse brain. (Courtesy of Hong-Wei Dong, M.D., Ph.D.; USC Laboratory of Neuro Imaging; USC Mark and Mary Stevens Neuroimaging and Informatics Institute.)