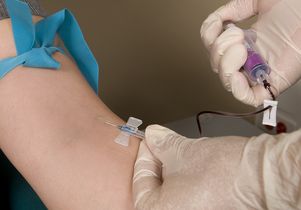 UCLA researchers have provided the first evidence that a simple blood test could be developed to confirm the presence of beta amyloid proteins in the brain, which is a hallmark of Alzheimer’s disease.

Although approximately 5 million Americans are living with Alzheimer’s, no reliable blood-based test currently exists for the neurodegenerative disorder that is the sixth-leading cause of death in the United States. Using blood-based biomarkers — a signature of proteins in the blood that indicate the presence of a disease — to diagnose Alzheimer’s could be a key advance.

“Blood-based biomarkers would have the important advantage of being safe, affordable and easy to administer in large groups or in rural areas, and therefore could have an enormous impact on clinical care and clinical trials alike,” said Dr. Liana Apostolova, director of the neuroimaging laboratory at the Mary S. Easton Center for Alzheimer’s Disease Research at UCLA and head of the research team. Results of the study appeared in the journal Neurology.

Alzheimer’s disease can be diagnosed definitively only by examining brain tissue after death. While people are alive, physicians must rely on proxy measures, or biomarkers, along with cognitive symptoms such as memory loss.

Two current methods for determining the beta-amyloid formation characteristic of Alzheimer’s disease both have drawbacks. Cerebrospinal fluid can be obtained from patients, but that requires a spinal tap, an invasive procedure that carries the risk of nerve damage and other serious side effects. Another method, the amyloid PET scan, while effective, exposes subjects to radiation. The PET scan is also expensive and is not typically covered by insurance as a diagnostic test. Also, few medical centers have the technology.

For their study, the UCLA researchers developed a simple signature for predicting the presence of brain amyloidosis — the build-up of amyloid in the brain — including several blood proteins known to be associated with Alzheimer’s disease, along with information routinely obtained in the course of a clinical work-up for patients suspected to have the disease, such as results of memory testing and structural magnetic resonance imaging.

Using blood samples and other data from patients with mild cognitive impairment from the Alzheimer’s Disease Neuroimaging Initiative – a large public-private partnership that began in 2004 – the UCLA researchers found that their method could be used to predict the presence of amyloid in the brain with modest accuracy.

“Our study suggests that blood protein panels can be used to establish the presence of Alzheimer’s-type pathology of the brain in a safe and minimally invasive manner,” Apostolova said. “We need to further refine and improve on the power of this signature by introducing new disease-related metrics, but this indicates that such a test is feasible and could be on the market before long.”

Although there is no treatment that can halt or reverse the progression of Alzheimer’s disease, a non-invasive, inexpensive and reliable test for diagnosing the disease could spare people with dementia and their families the anxiety associated with uncertainty, direct them to support services earlier, and improve their likelihood of benefiting from current and future advances in treatment.

Such a test would also have a major impact on research. “With the advent of the amyloid PET scan we are learning that as many as 25-30 percent of subjects who enroll in Alzheimer’s disease clinical trials turn out not to have the disease,” said Apostolova. “That makes it difficult to measure the effects of the treatment being tested.”

There were multiple funders for the study including the UCLA Easton Consortium for Alzheimer’s Drug Discovery and Biomarker Development, the National Institute of Mental Health (U01 AG024904), and the Alzheimer’s Disease Neuroimaging Initiative. Please see paper for complete list.