The results were published Thursday, July 24 in the Journal of Parkinson’s Disease. 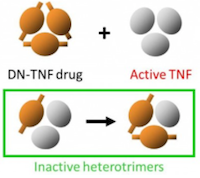 The findings demonstrate that the drug, called XPro1595, can reach the brain at sufficient levels and have beneficial effects when administered by subcutaneous injection, like an insulin shot. Previous studies of XPro1595 in animals tested more invasive modes of delivery, such as direct injection into the brain.

An anti-inflammatory drug that interferes with tumor necrosis factor (TNF) may be able to slow the progression of Parkinson’s disease, results from an animal model of Parkinson’s suggest.

“This is an important step forward for anti-inflammatory therapies for Parkinson’s disease,” says Malu Tansey, PhD, associate professor of physiology at Emory University School of Medicine. “Our results provide a compelling rationale for moving toward a clinical trial in early Parkinson’s disease patients.”

The new research on subcutaneous administration of XPro1595 was funded by the Michael J. Fox Foundation for Parkinson’s Research (MJFF). XPro1595 is licensed by FPRT Bio, and is seeking funding for a clinical trial to test its efficacy in the early stages of Parkinson’s disease.

“We are proud to have supported this work and glad to see positive pre-clinical results,” said Marco Baptista, PhD, MJFF associate director of research programs. “A therapy that could slow Parkinson’s progression would be a game changer for the millions living with this disease, and this study is a step in that direction.”

In addition, Tansey and Yoland Smith, PhD, from Yerkes National Primate Research Center, were awarded a grant this week from the Parkinson’s Disease Foundation to test XPro1595 in a non-human primate model of Parkinson’s.

Evidence has been piling up that inflammation is an important mechanism driving the progression of Parkinson’s disease. XPro1595 targets tumor necrosis factor (TNF), a critical inflammatory signaling molecule, and is specific to the soluble form of TNF. This specificity would avoid compromising immunity to infections, a known side effect of existing anti-TNF drugs used to treat disorders such as rheumatoid arthritis.

“Inflammation is probably not the initiating event in Parkinson’s disease, but it is important for the neurodegeneration that follows,” Tansey says. “That’s why we believe that an anti-inflammatory agent, such as one that counteracts soluble TNF, could substantially slow the progression of the disease.”

When XPro1595 is given to the animals 3 days after 6-OHDA injection, just 15 percent of the dopamine-producing neurons were lost five weeks later. That compares to controls in which 55 percent of the same neurons were lost. By reducing dopamine neuron loss with XPro1595, the researchers were also able to reduce motor impairment. In fact, the degree of dopamine cell loss was highly correlated both with the degree of motor impairment and immune cell activation.

When XPro1595 is given two weeks after injection, 44 percent of the vulnerable neurons are still lost, suggesting that there is a limited window of opportunity to intervene.

“Recent clinical studies indicates there is a four or five year window between diagnosis of Parkinson’s disease and the time when the maximum number of vulnerable neurons are lost,” Dr. Tansey says. “If this is true, and if inflammation is playing a key role during this window, then we might be able to slow or halt the progression of Parkinson’s with a treatment like XPro1595.”

Tansey is a co-inventor on patents describing dominant negative-TNF technology and an ex-employee of Xencor, which developed the technology and XPro1595, but holds no signiﬁcant ﬁnancial stake in the company. R.J. Tesi, CEO of FPRT Bio, is a co-author of the paper.