Neurons in the brain have extraordinarily high energy demands due to its complex dendrites that expand to high volume and surface areas. It is also known that neurons are the first to die from restriction of blood supply to tissues, causing a shortage of oxygen and glucose needed for cellular metabolism. Little was known, however, on how cells adjust to low energy level environments in the developing brain, when mitochondria–the so-called “power plant” of the cell–do not get delivered on time, and a lag in the energy distribution occurs, which may lead to a variety of neurodegenerative disorders.

To unlock the mystery, the team studied mitochondria and energy consumption in a live, growing nerve cell over the course of a week.

“If neurons try to grow in low ATP energy levels, they could end up deformed, and even worse, put the life of the cell itself at stake,” said Kansai Fukumitsu, who was involved in the study. “Since a single mitochondria in the root of the cell is not enough to supply energy to the nerve ends, the cell distributes mitochondria to its most outer branches to deliver power where energy levels are scarce.”

In areas of low ATP energy concentrations, chemical changes were brought by molecular proteins, which stopped the dendrites from growing further.

“We found two protein molecules that synergistically produced enzymes to allocate energy molecules where it is direly needed for cellular survival,” says Mineko Kengaku, the principal investigator of the study from iCeMS.

In the future, Kengaku and her co-authors envision treatments for incurable diseases by mapping the nerve cell metabolism in an energy-deprived state. “If we can get a better understanding of an unhealthy neuron, we may someday find ways to cure pathologies caused by them.” 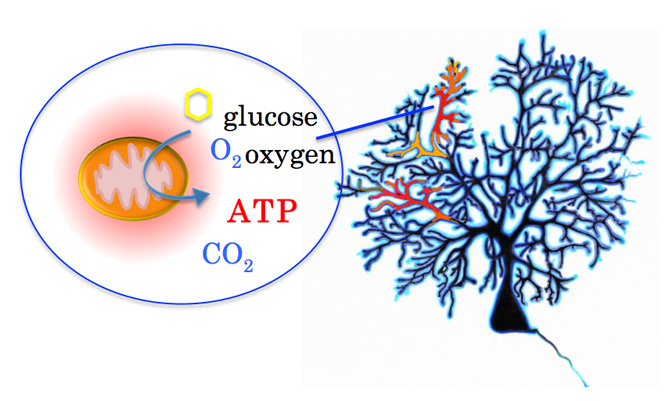 Mitochondria produce energy that cells need in order to function. ATP energy is produced when the mitochondria transfers glucose and oxygen into water and carbon dioxide. How ATP is produced and delivered to intricate neuronal dendrites has been a mystery.