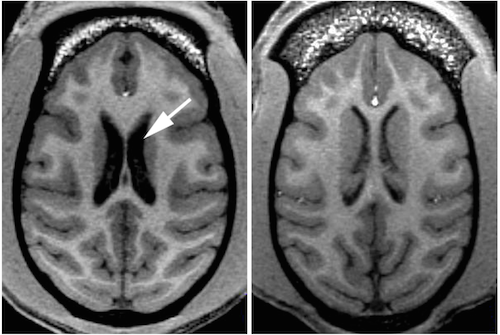 These findings are promising for developing a preclinical, large animal model of Huntington’s disease for assessing new therapeutics, which could ultimately provide better treatment options, including altering the course of the disease. In this first multiyear study on a transgenic nonhuman primate model for Huntington’s, lead author Anthony Chan, DVM, PhD, and colleagues engineered monkeys to develop a slower and more gradual form of the neurodegenerative disease.

“It was important to recapitulate progressive changes in clinical measurements, such as cognitive behaviors and neural anatomical changes as the Huntington’s disease monkeys age. Our finding of similarity in clinical progression between human patients and Huntington’s disease monkeys suggests monkeys could become a preclinical, large animal model for the development of new treatments,” says Chan, associate professor of human genetics at Emory University School of Medicine and a researcher at the Yerkes National Primate Research Center.

The findings were published online in PLOS ONE on Tuesday, May 12.

Although mouse models of Huntington’s exist, it is difficult for researchers to study certain aspects of the disease. A nonhuman primate model could eliminate the current gap and allow researchers to better study aspects of fine motor control and cognition in a nervous system that is structurally similar to humans’.

With support from the Yerkes Research Center and the Office of Research Infrastructure Programs at the National Institutes of Health, Chan and colleagues are establishing a Transgenic Huntington’s Disease Monkey Resource to facilitate preclinical research, consisting of a breeding colony, a biomaterial repository and a sperm bank. This resource will be the first of its kind and will be a prototype for other transgenic primate research programs with rhesus monkeys and marmosets.

Huntington’s is an inherited disease caused by a gene encoding a toxic protein (mutant huntingtin) that causes brain cells to die. Symptoms commonly appear in the 40s and include uncontrolled movements, balance problems, mood swings and cognitive decline. There is also a juvenile form of Huntington’s disease, which can occur during the teenage years.

In the PLOS ONE paper, Chan and colleagues describe how three male rhesus macaques they studied displayed cognitive and motor impairments emerging at 16 months of age, and dystonia and signs of neurodegeneration on brain imaging at 24 months of age. Rhesus macaques normally go through puberty around 3-5 years of age and can live for 25 or 30 years. Studying these symptoms earlier in the animal model gives researchers more time to monitor the progression of the disease as well as assess the efficacy of potential therapeutics and to determine if and when the course of the disease could be altered.

These three monkeys carried a gene encoding a fragment of mutant human huntingtin. The researchers introduced this extra gene, designed to be regulated in a way that is similar to normal huntingtin genes, by injecting rhesus macaque oocytes with a viral vector.

Beginning at 8 months of age, the researchers tested the animals in an “object retrieval detour task” (retrieval of an M&M candy from a transparent box that is open on one side) and a fine motor task (freeing a Life Saver candy by moving it along a bent metal rod), both well-established tests for cognitive and fine motor control in nonhuman primates. The researchers also viewed the monkeys’ brains via magnetic resonance imaging (MRI), which revealed progressive degeneration of the striatum, a region of the brain known to be affected in humans with Huntington’s.

The research was supported by the National Institutes of Health’s Office of Research Infrastructure Programs (5R24OD010930 and primate centers: P51OD11132 – formerly NCRR P51RR000165).

In the fields of microbiology and immunology, infectious diseases, pharmacology and drug discovery, transplantation, neurologic and psychiatric diseases, as well as behavioral, cognitive and developmental neuroscience, Yerkes scientists use innovative experimental models and cutting-edge technologies to explore and test transformative concepts aimed at: preventing and treating viral diseases such as AIDS; designing novel vaccines for infectious diseases such as malaria and tuberculosis; enhancing the potential of organ transplantation and regenerative medicine; discovering new drugs and drug classes through high-throughput screening; defining the basic neurobiology and genetics of social behavior and developing new therapies for disorders such as autism and drug addiction; investigating how adverse social experience and consuming an unhealthy diet influence neurobehavioral and immune system development, and evaluating interventions to alleviate negative health outcomes; understanding the biology of neurodegenerative diseases, such as Alzheimer’s and Parkinson’s diseases; and advancing knowledge about the evolutionary links between biology and behavior.