Untangling a cause of memory loss in neurodegenerative diseases 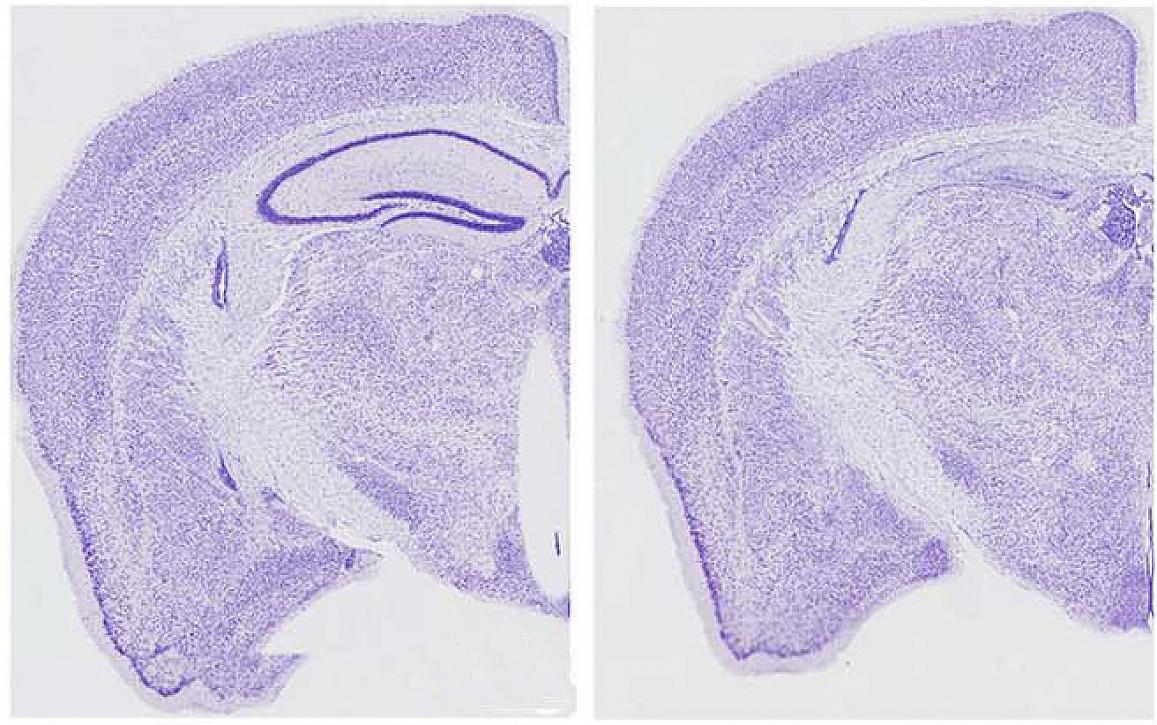 Tauopathy-induced Neuronal Degeneration – Sections of brains from normal (left) and tauopathy (right) mice. The dark purple lines in the left image represent the hippocampus, the area most responsible for learning and memory. This structure is almost completely absent in the right image. Ashe lab

Tauopathies are a group of neurodegenerative disorders, including Alzheimer’s disease that are characterized by the deposition of aggregates of the tau protein inside brain cells. A new study reveals that the cutting of tau by an enzyme called caspase-2 may play a critical role in the disordered brain circuit function that occurs in these diseases. Of interest, the culprit tau fragment identified in this study is actually resistant to forming aggregates, and it causes a disturbance in memory function in animal models before brain cell loss occurs.

In mice genetically engineered to mimic aspects of human tauopathy disorders, the researchers restored some of the learning and memory deficits by blocking caspase-2 activity, which suggests that some of the cognitive loss seen in tauopathies might be reversible. The study was funded by the National Institutes of Health’s National Institute of Neurological Disorders and Stroke (NINDS) and published in the journal Nature Medicine.

“The results of this exciting study suggest that the cognitive loss that occurs in tauopathy may be reversed by blocking the function of caspase-2,” said Roderick A. Corriveau, Ph.D., a program director at NINDS. “This motivates further investigation of caspase-2 as a novel therapeutic target for dementia.”

Using a mouse model of tauopathy that produces a mutated form of human tau protein, researchers correlated memory deficits with the presence of a fragment of the tau protein. The tau fragment, which is produced when caspase-2 cuts the full-length tau protein at a specific location, was also found at higher levels in the brains of Alzheimer’s disease patients compared to healthy individuals of the same age.

While the standard hallmark of tauopathies is the appearance in brain tissue of large tangles of abnormal tau protein, it has recently become less clear whether the tangles of tau are actually causing cognitive decline.

“In the past, many studies focused on the accumulation of tangles and their connection to memory loss,” said Karen H. Ashe, M.D., Ph.D., professor of neurology at the University of Minnesota and senior author of this study, “but the more we learn, the less likely it seems that they are the cause of disease symptoms. The pathological fragment of tau that we have identified resists forming tangles and can instead move freely throughout the cell. Therefore, we decided to look for other mechanisms that could affect synaptic function.”

To do this, Dr. Ashe’s group used fluorescent labeling to track and compare the behavior of normal and mutated tau in cultured neurons from the rat hippocampus, the brain region most associated with learning and memory. Unlike normal tau, both mutated tau and the short fragment produced when caspase-2 cuts tau were primarily found within structures called dendritic spines, where neurons receive inputs from neighboring cells. The overabundance of mutated tau, including the caspase-2-produced fragment, caused disruptions in synaptic function in the spines. The impact on synapses was specific, with no observed effects on the overall structure or survival of the neurons.

“It appears that abnormally processed tau is disrupting the ability of neurons to properly respond to the signals that they receive, producing memory deficits independent of tangle formation,” said Dr. Ashe. “Because this effect is occurring without cell death or a loss of synapses, we have a better chance of intervening in the process and hopefully reversing symptoms of the disease.”

Dr. Ashe and her team are now planning additional experiments to uncover the mechanisms by which abnormally processed mutant tau produces memory deficits.

The study was supported by the NIH (NS63214 and NS79374) with additional funding provided by the T. and P. Grossman Family Foundation, B. Grossman, and K. Moe.