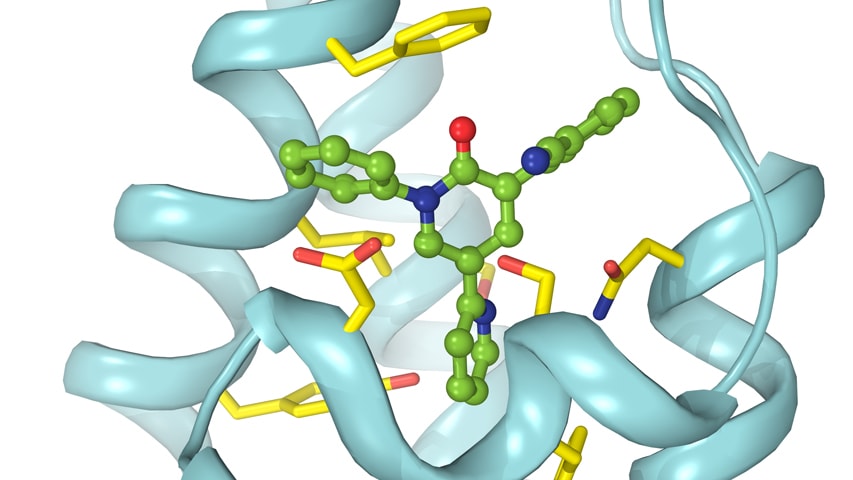 As many as one out of four adults who suffer from epilepsy do not respond to any available drugs. That makes the search for effective new anti-seizure medications vital, and Carnegie Mellon University chemist Maria Kurnikova is playing a key role in that quest.

Kurnikova, an associate professor of chemistry, is part of a team that published a paper in the journal Neuron that shows how one class of drugs blocks the spread of out-of-control electrical signals in the brain during a seizure.

A team led by Alexander Sobolevsky at Columbia University used crystallography and other techniques to visualize how the drugs block signals in the AMPA brain receptor, which is one of the main gateways for electrical signals as they propagate through the brain.

In epilepsy, the AMPA receptors appear to be hypersensitive, opening the way for the firestorm of electrical impulses that comprise a seizure. 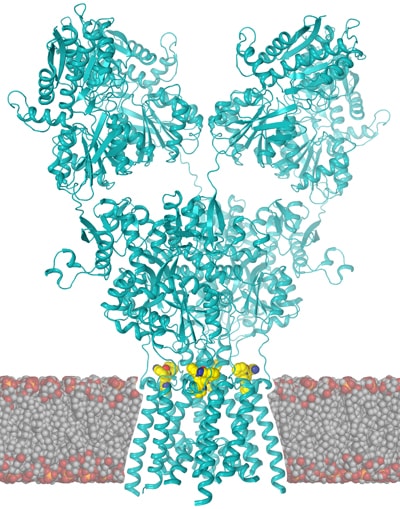 AMPA receptor (blue) is inactivated by antiepileptic drug Perampanel (yellow), which is wedged into binding sites on the upper edge of the cell membrane (gray and red). Credit: Laboratory of Alexander Sobolevsky, Ph.D./Columbia University Medical Center

Kurnikova, who specializes in computer simulations of how molecules interact in the brain, helped identify the binding sites for the drugs, supporting the idea that the medications sit like a wedge in the AMPA receptor and keep signals from getting through.

Because AMPA receptors are necessary for normal brain function, any drug that blocks some of those receptors can cause certain side effects, including sleepiness, nausea and headaches.

“Basically what you want to do with the drugs is create a situation where the excitation [in the brain] is not quite so easy to achieve, so you might create some sleepiness,” Kurnikova said. “But if it’s a question of sleepiness versus epilepsy, you would take the sleepiness.”

In the future, the work being done by Kurnikova’s and Sobolevsky’s team may be used to tweak the anti-seizure drugs to reduce the side effects. Sobolevsky notes that this class of drugs, which includes a commercially available medication known as perampanel, already “is way safer than other types of medications,” and the new study suggests that “by changing the design of the drug we can make it even safer.”

Sobolevsky’s group used techniques like crystallography and electrophysiological measurements to visualize the shape of the drug and receptor molecules, and to show how the drug changes the receptor’s function. Kurnikova enhanced the findings by using software programs that simulate the precise way the drug molecules bind to the receptor.

To do that, the computer program examines millions of different configurations between the drug and the receptor, which requires enormous computing power. In her laboratory at the Mellon Institute, Kurnikova uses computers that are much more powerful than what was available when she started this kind of work several years ago.

One reason she can simulate molecules and proteins so much better today is the advances made by the gaming industry. By developing powerful graphics cards in computers to create realistic animations in video games, computer manufacturers have enabled her to buy a $2,000 PC that can accomplish the work of 20 computers just 10 years ago.

She also makes use of a special high-speed computer designed specifically for molecular simulations. Named ANTON, the computer was created by the D.E. Shaw Co. and is housed at the Pittsburgh Supercomputing Center. Because it is in demand by researchers around the nation, she must compete for time on ANTON by applying to the National Academy of Sciences.

This year, she was allotted enough time to simulate 30 microseconds in the life of an AMPA receptor. The ANTON simulation was 100 times faster than what she has in-house.

Kurnikova grew up in Norilsk, a mining city in Russia near the Arctic Ocean, where the average high temperature in winter is less than 5 degrees. Her parents were engineers who later moved to Moscow, where she got her master’s degree from the Moscow Institute of Physics and Technology. She then earned her Ph.D. in theoretical chemistry from the University of Pittsburgh, and went on to do research and teaching in Israel and at Marquette University before joining the Carnegie Mellon faculty in 2003. She was promoted to associate professor in 2009.

Her daughter is a Carnegie Mellon graduate and a graduate student in neuroscience at the University of California at San Diego.

If Sobolevsky and Kurnikova can get additional funding for their epilepsy research, they hope to design new drugs that could block seizures with even fewer side effects. While there are a few medications that have been developed this way, she said, “Such rational drug design is difficult. Drug companies usually try everything they can think of and see what sticks.”

Working together, Sobolevsky said, “we will propose new drugs, and if we are right about our assumptions, some of our new proposed drugs should be better.”