In a breakthrough for Parkinson’s disease, scientists at EPFL have reconstructed the process by which Lewy bodies form in the brain of patients. The study offers new insights into how Parkinson’s disease begins and evolves, and opens up a set of potential new treatment targets.

The brains of patients with Parkinson’s disease contain distinct, characteristic structures called “Lewy bodies”, after Friedrich Heinrich Lewy who first reported their discovery in 1912. Over a hundred years later, questions still remain about Lewy bodies; specifically, how they first develop in neurons and what exactly they’re made of and how they contribute to the initiation or progression of the disease.

What we do know about Lewy bodies is that they are the hallmark of Parkinson’s disease, as well as related disorders, called synucleinopathies. One of their main component is alpha-synuclein, a protein that forms long fibrils, which become tangled up and radiate from the “core” of the Lewy body.

Thus, alpha-synuclein and Lewy bodies have emerged as prime targets for developing therapies and diagnostics for Parkinson’s and related diseases.

Today, the absence of experimental models that reproduce all the stages of Lewy Body formation and maturation limits our understanding of the different processes involved the pathogenesis of Parkinson’s disease. Human Lewy bodies studies only offer snapshots, as they rely on post-mortem tissue from different patients, who died at various stages of the disease, and thus do not offer insight as to how alpha-synuclein fibrils form and and their role in Lewy Body formation.

In a new paper published in PNAS, researchers from EPFL’s Brain Mind Institute have carried out the first study to track the development of alpha-synuclein Lewy bodies from beginning to end. The extensive study, led by the group of Hilal Lashuel at EPFL, provides new insights into the composition and mechanisms of Lewy body formation, and shows that the process of Lewy body formation, as opposed to simply fibrillization, is one of the main drivers for neurodegeneration.

The researchers began by inducing alpha-synuclein to form fibrils in cultured primary neurons. To do this, they first gave the cells a small amount of alpha-synuclein fibrils as “seeds”, which then began to grow through recruitment of the endogenous alpha-synuclein. “This approach has proven incredibly useful in modeling the formation of alpha-synuclein aggregates linked to diseases like Parkinson’s,” says Hilal Lashuel.

With the seeding complete, the researchers settled in to monitor the cells beyond the usual two-week cutoff point, which seems too early to observe the classical Lewy Body, as seen in the brains of patients with Parkinson’s disease. In collaboration with scientists at EPFL’s core facilities, they dissected the process of Lewy Body formation and showed that just a few extra days would be enough to see the alpha-synuclein fibrils evolve into clumps and, ultimately, to structures resembling Lewy bodies.

“Time, being patient and using a swiss army knife analytical approach is all that was required” says Lashuel. Anne-Laure Mahul-Mellier, the senior scientist that led the study, continued: “This led us to focus on investigating the requirements for the transition from the filamentous fibrils to Lewy bodies”.

And they were right: at almost three weeks, the structures began to appear, in every way similar to Lewy bodies. So the question now was, were they actually Lewy bodies? 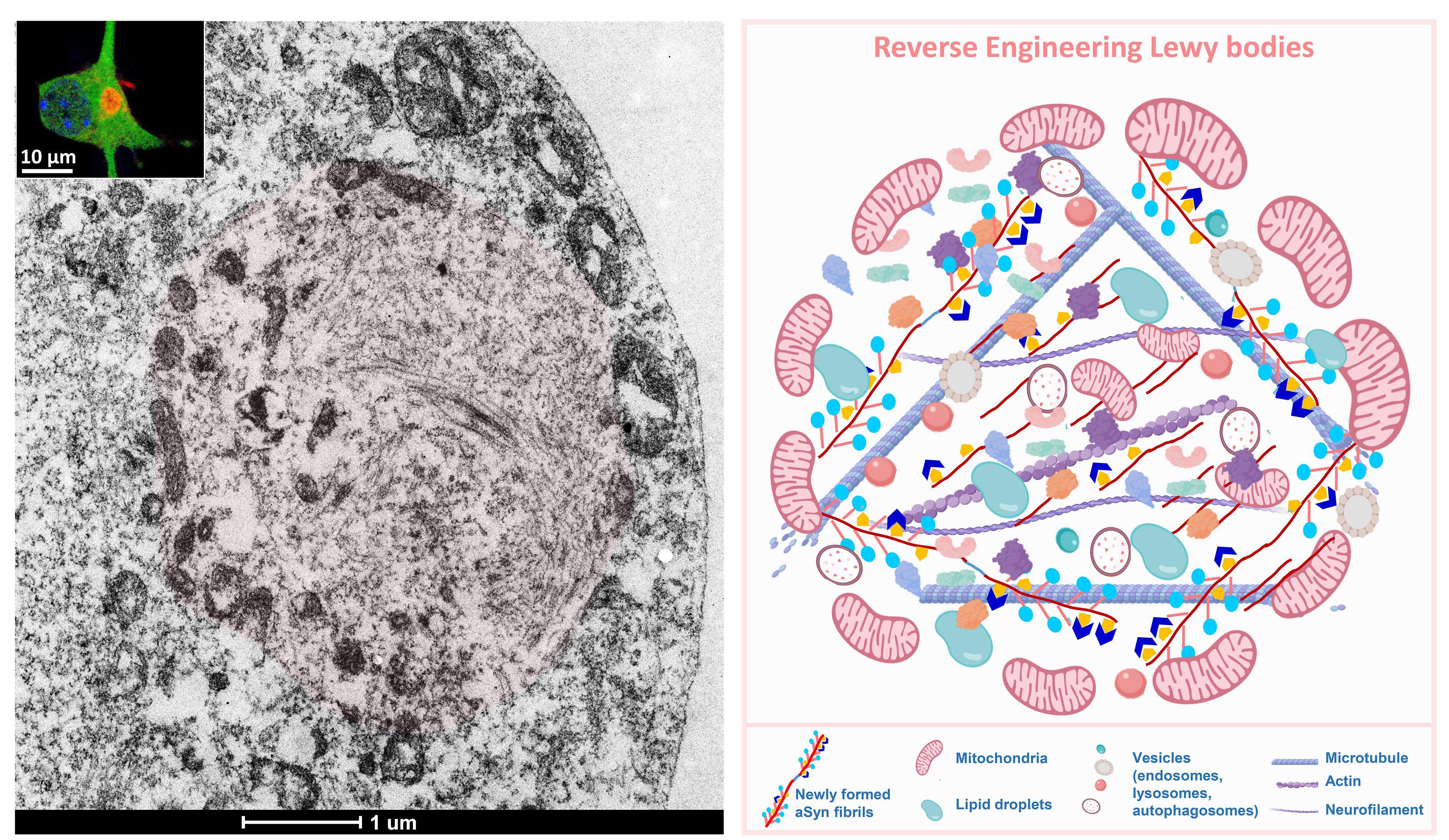 Next, the researchers used proteomics to analyze their lab-grown structures and search for “biomolecular signatures” found in actual Lewy bodies from human brain tissues. The analysis revealed that the lab-grown structures shared between 15%-20% of their protein content with “natural” Lewy bodies. Given that Lewy bodies in vitro grow more slowly than those in a live brain, this percentage is actually encouragingly high.

Finally, the researchers sought to determine which step along the pathway of Lewy bodies could be the major driver of neurodegeneration seen in Parkinson’s disease. For this, they used correlative light-electron microscopy, which is used to visualize the processes of alpha-synuclein fibril formation and the transition from fibrils to Lewy bodies at different length scales. The imaging revealed a cascade of processes triggering the sequestration of key cellular organelles inside the Lewy body structure, which leads to severe mitochondria defects and other neuronal dysfunction, ultimately causing the death of the neurons. “Our findings show that the accumulation of fibrils in neurons is not sufficient to cause neurodegeneration and that most of the damage is caused during the transition from fibrils to Lewy bodies”. says Dr. Mahul-Mellier

“Our results generally agree with recent findings reported on Lewy bodies from Parkinson’s disease brains,” says Lashuel. “But while previous studies only offered snapshots of fibril evolution, our model can reconstruct the entire process of Lewy body formation, making it a powerful platform for elucidating the relationship between fibrillization and neurodegeneration in Parkinson’s and other diseases, and to screen for novel potentially disease modifying therapies.”