However, doctors have been worried up to now that low-dose acetylsalicylic acid (i.e. aspirin) – frequently prescribed for preventing heart attacks –might produce skewed test results. Scientists of the German Cancer Research Center (Deutsches Krebsforschungszentrum, DKFZ) have now shown in a study with 2,000 participants that taking aspirin even increases the sensitivity of immunological stool tests. 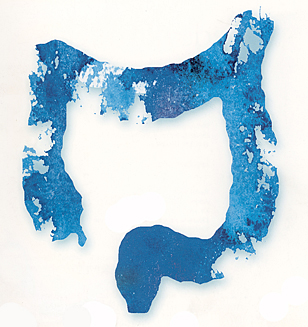 A large part of the almost 73,000 colorectal cancers that are newly diagnosed in Germany each year could be avoided. If precancerous lesions are detected and removed at an early stage, there is a great chance that cancer will not develop at all. So-called fecal occult blood tests are an important method of the early detection of bowel cancer. New test methods which detect blood components on an immunological basis are considered particularly promising.

In Germany, taking stool screening tests is recommended for individuals over age 50. However, many people in this age group are regularly taking low doses of aspirin to prevent heart attack or stroke. The drug increases the occurrence of bleeding in the gastrointestinal tract. Therefore, doctors are worried that these bleedings might skew the results of bowel cancer early detection tests. The tests might respond to blood which does not originate from precancerous lesions. On the other hand, aspirin might also increase the bleeding tendency of precancerous lesions – and thus the chances of discovering such lesions.

A research group led by Professor Dr. Hermann Brenner and Dr. Ulrike Haug of DKFZ has investigated the impact of aspirin in a study which included about 2,000 people who had taken a colonoscopy for early colorectal cancer detection between the years of 2005 und 2009. More than ten percent of participants – 233 persons – reported to be regular low-dose aspirin users. This shows how common it is to take this drug and why physicians have regarded a possible distortion of test results a serious problem in the early detection of bowel cancer.

In addition to colonoscopy, all study participants received two different immunological fecal occult blood tests. The test results were compared to the colonoscopy findings. Colonoscopy is considered the most certain method of detecting precancerous lesions. The study was intended to answer two questions: What percentage of precancerous lesions is detected by the test? This value quantifies the sensitivity of this method. The other question was: In what percentage of cases does the test produce negative results in the absence of precancerous lesions? This value determines the specificity of the test.

Colonoscopy showed that there are no differences between aspirin users and non-users in the occurrence of advanced precancerous lesions (10.2 percent and 10.4 percent respectively). But the investigators were surprised about the analysis of the two immunological tests: While the sensitivity of the two stool tests was 70.8 and 58.3 percent respectively among those taking aspirin, it was only 35.9 and 32 percent respectively among those participants not taking aspirin. As to specificity, the immunological tests were only slightly less specific in the group of aspirin users than in the control group (85.7/85.7 percent versus 89.2/91.1 percent).

“That means that the tests detected existing precancerous lesions almost twice as often in aspirin users than in persons not taking the drug. At the same time, the number of ‘false alarms’ was only insignificantly higher,” said Hermann Brenner. Among aspirin users the stool test even turned out to have a sensitivity that comes close to the certainty of a sigmoidoscopy. This prompted the scientists to speculate whether short-time low-dose aspirin use might improve the results of stool screening tests.

Within their cancer screening program, statutory health insurances in Germany offer a fecal occult blood test for all insured persons from the age of 50. However, the health insurances currently cover only enzymatic tests, not immunological ones. Individuals from age 55 are additionally entitled to a screening colonoscopy free of charge, and, provided the first examination was taken before age 65, another one after 10 years.