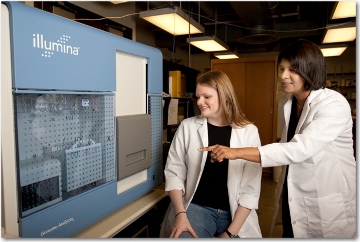 A strong proponent of student success, Preethi Gunaratne is pictured with one of the many students from her lab. Here, she points out the Illumina Genome Analyzer, a key piece of equipment used in her research, to graduate student Ashley Benham. (Photo by Thomas Campbell)
December 21, 2010-Houston-

The day when an ovarian cancer patient can treat her tumor with a single, painless pill instead of a toxic drug cocktail is the ultimate goal of the pioneering research of a University of Houston (UH) scientist.

Preethi Gunaratne, assistant professor in the department of biology and biochemistry, is studying a class of tiny genetic molecules known as microRNAs and pinpointing those that could unleash the body’s natural cancer-fighting agents. Additionally, she is developing a novel method to effectively deliver this treatment to the targeted cells by using an unusual carrier – nanoparticles of gold – through the work of Lalithya Jayarathne, a postdoctoral researcher in Gunaratne’s lab.

Gunaratne’s potentially groundbreaking work in ovarian cancer has gained exceptional notice and momentum this year with a series of high-profile research grants. In October, her ovarian cancer project was awarded a $200,000 High Impact/High Risk grant from the Cancer Prevention and Research Institute of Texas (CPRIT), which oversees the state’s billion-dollar war on cancer. In November, she was approved for a $250,000 grant from Houston’s Cullen Foundation. Earlier this year, she was chosen a beneficiary of the Baylor College of Medicine Partnership Fund.

Each year, the Baylor partnership undertakes a major fundraising campaign for a specific health project. For 2010-11, the partnership is raising money to fund the collaborative ovarian cancer project of Gunaratne and Baylor researchers Matthew Anderson and Martin Matzuk.

All this promising research has its origins in a revolution in genetic science that began just a few years ago. Attention has long centered on nucleic acids known as DNA, with little consideration given to its cousin RNA or to microRNAs, which were considered “genetic junk” that played no significant role in the human genome, Gunaratne said.

That began to change earlier this decade as scientists discovered that microRNAs might actually be the hidden regulators that control the 30,000 genes in the human body by silencing gene expression. Gunaratne has been at the vanguard of this development. With its 2008 acquisition of a $1 million genome sequencer device – the Illumina Genome Analyzer – UH instantly became a major player in this cutting-edge research. This state-of-the-art machine can rapidly deconstruct and analyze millions of pages worth of genetic data and allowed Gunaratne’s lab to sequence hundreds of normal and diseased tissue samples.

Gunaratne set her sights on a variety of cancers, including ovarian tumors, pediatric neuroblastoma and multiple myeloma. Using the sequencer in collaboration with Baylor, Texas Children’s Cancer Center and the Lurie Cancer Center at Northwestern University, her team created a unique database documenting genome-wide patters of microRNA and gene expression across an array of human tissues and cancers. The ultimate goal is to connect specific microRNAs with the genes they regulate, individualized to attack specific genomes.

From this database, Gunaratne’s team was able to pinpoint a handful of microRNAs in the human body that can significantly or completely suppress the growth of cancer cells. One in particular, miR-31, discovered by Baylor collaborators and Gunaratne, shows promise as a potent tumor suppressor in ovarian cancer, glioblastoma, osteosarcoma and prostate cancer.

They discovered that miR-31 can specifically target and kill cancer cells that are deficient in p53, a crucial gene that guards the integrity of the genome and prevents cancer. More than half of all cancers and 90 percent of papillary serous tumors – the most common type of malignant ovarian cancer – are p53-deficient.

In cell cultures miR-31 suppressed and killed tumor cells deficient in p53, while sparing cells with a normal p53 gene. Since all non-cancerous cells in the body would be resistant to miR-31, it can fight tumors without the side effects associated with chemotherapy.

“Delivering these microRNAs into human patients is a much trickier proposition than working on cell cultures and has never been done,” Gunaratne said. “Other types of gene therapy have been delivered with modified viruses in clinical trials, but ongoing safety concerns will likely prevent its widespread use.”

However, Gunaratne believes gold, which is biocompatible and easily functionalized to carry hundreds of microRNAs on the surface, can act as an effective carrier of genetic molecules. In lab tests, gold nanoparticles containing miR-31 penetrated 90 percent of targeted cells within 20 minutes, killing cancer cells three times faster than microRNAs delivered through lentiviruses, which are traditionally used in carrying gene-based treatments to diseased cells.

The next step is to test these microRNA-conjugated gold particles on tumors in mice to see if they can be delivered orally or through injection to shrink the tumors. If all goes as planned, this potentially revolutionary ovarian cancer treatment could be ready for Phase One clinical trials in humans at the end of the two-year CPRIT grant, Gunaratne said.

Ovarian cancer is the fifth deadliest cancer among women, with about 15,000 deaths annually in the United States. Thus far, in cancer treatment generally, genetic markers have been helpful in assessing cancer patients’ risk and channeling them into the most effective treatment options. If scientists like Gunaratne are successful, doctors will go beyond just observing and reacting to a cancer patient’s gene expression to actually changing it, activating the body’s natural tumor suppressants. This could make chemotherapy a thing of the past.

“Although ovarian tumors are the focus of this project, our microRNA research is applicable to other cancers and diseases, too,” Gunaratne said. “Because a single microRNA can regulate hundreds of genes across diverse signaling pathways, they provide an especially promising way to control the patterns of gene expression that cause disease.”

Gunaratne also is a co-investigator with Baylor researchers on two other CPRIT grants announced in October, totaling $2.5 million.  In one they will test siRNA-conjugated gold particles as an anti-cancer agent with Baylor’s Dr. Larry Donehower, and in the other they will use next-generation sequencing to look at epigenetic signals in malignant blood-related cancers with Dr. Margaret Goodell.

This most recent round of CPRIT grant awards marks the first time UH has received a research grant from CPRIT. Previous awards were for training graduate students and for raising cancer awareness.

“All these awards, CPRIT included, underscore UH’s growing role in biomedical research and demonstrate we can compete with other research powerhouses both locally and nationally,” Gunaratne said.

Editor’s note: This news release was written in collaboration with Rolando Garcia, science writer for the College of Natural Sciences and Mathematics office of communication. High-resolution photos of Preethi Gunaratne in her lab are available to media by contacting Lisa Merkl.